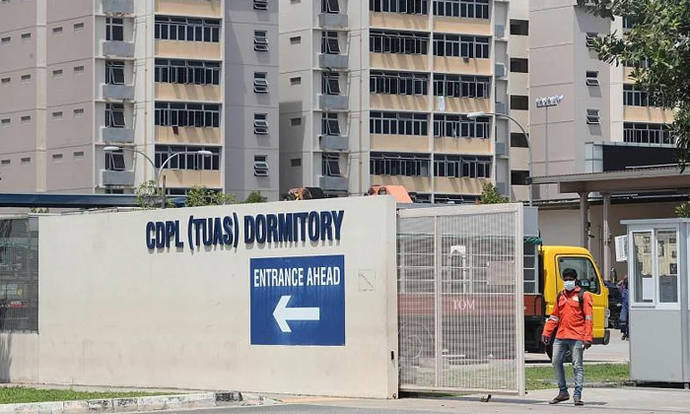 What started as a playful act of hitting each other turned into a fight and culminated in one Bangladeshi national stabbing another with a kitchen knife.

The victim suffered lacerations to the small intestine and required hospitalization for two weeks.

Hossen Md Midul was sentenced to six months in prison on Tuesday June 21 after pleading guilty to one count of willfully injuring his roommate at CDPL Tuas Dormitory on January 13 this year.

The court heard that the two men, aged 24, worked for the same company at the time.

Around 7:30 p.m. on January 12, Hossen and the victim were playfully hitting each other.

It escalated into a fight and they had to be separated by five other roommates living in the same dorm.

Deputy Attorney General Kwang Jia Min said, “The defendant felt angry with the victim because of the fight and couldn’t sleep on the night of January 12. He then formed the intention to injure the victim.

After midnight on January 13, Hossen retrieved a kitchen knife while his housemates slept.

He then used it to stab the victim on the left side of his abdomen and fled to the dorm’s exercise corner.

The victim woke up in severe pain and found a knife lodged in his abdomen. He alerted the police, who then arrested Hossen.

According to a medical report presented to the court, the knife narrowly missed the victim’s abdominal aorta, which is the main artery that supplies blood to the lower body.

Had it ruptured, it could have resulted in life-threatening internal bleeding.

The victim had to undergo surgery to have part of his small intestine removed and the remaining parts stitched back together. He was granted 28 days of hospital leave.

The maximum penalty for willfully injuring is seven years in prison, a fine and a caning.

7 things to do this summer in the coastal town of Halat, Lebanon