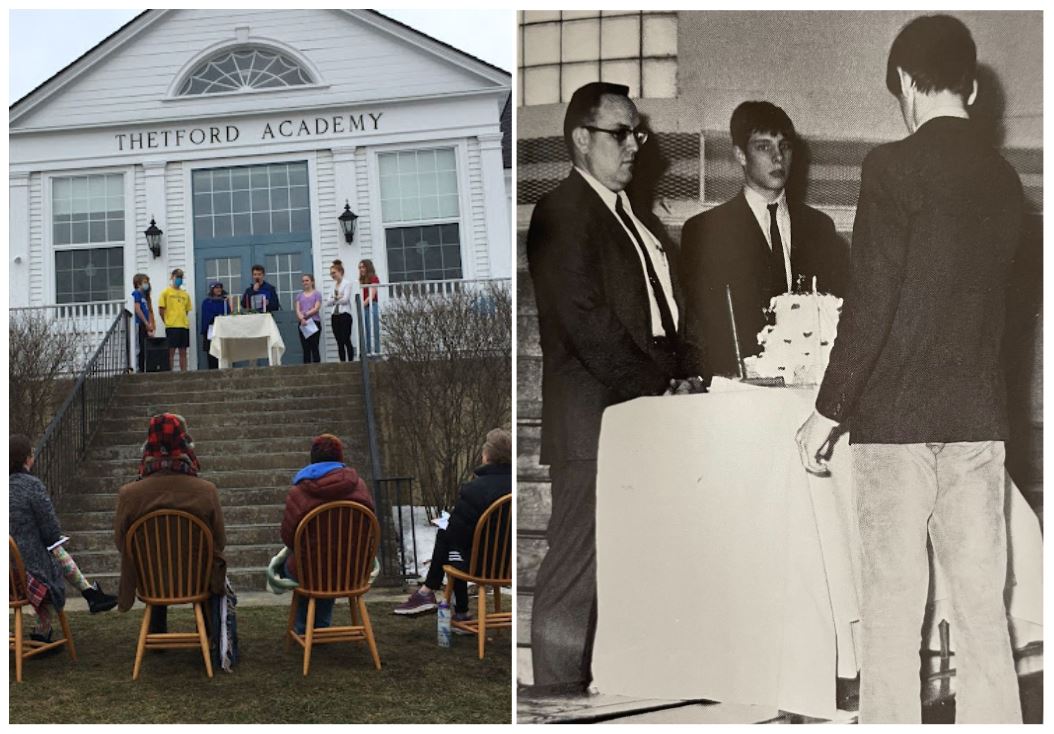 Editor’s note: The Underground Workshop is a collaborative network of student journalists from across Vermont. This story is part of an invited series, celebrating the positives of our schools. For more information, please contact Workshop Editor Ben Heintz at [email protected]

One night in November 1942, residents of Thetford Hill noticed smoke billowing from the school opposite. Flames engulfed the main building. Before anything could be done, the fire spread to the girls’ and boys’ dormitories, the library and the bell tower. In the morning, the Academy of Thetford had disappeared.

Almost 80 years later, at 8:15 a.m. on March 11, 2022, students and staff at Thetford Academy gathered outside the steps of the historic White Building. School Principal Carrie Brennan greeted everyone with a tribute to the school’s history: a story about the school’s perseverance through the adversity of the 1940s.

The same story has been told for many years and ends by describing Founders Day as “a tradition meant to honor [the school’s] long history, celebrate the difficulties overcome and the successes to come and bring smiles to the smiles of students and teachers.

The 1940s were a decade of challenges and rebuilding at Thetford Academy. The fire, along with the effects of World War II, led director Carl Anderson to realize that something had to happen to lift the spirits of the community. This led to the creation of Founders’ Day, an event that remains a beloved tradition even in the midst of a pandemic.

This year, the increase in Omicron cases has caused Founders Week to be moved to mid-March. The celebration usually takes place on the anniversary of the founding of Thetford Academy in February, but the decision to change the date was made to allow more ‘normal’ activities to begin.

Thetford Academy is the oldest high school in Vermont. 2022 marks the 203rd anniversary of its founding in 1819. Much has changed since then: classes are not separated by gender and students no longer reside on campus. Even the physical buildings have moved, since they were rebuilt across the street after the fire. But TA’s values, including its strong sense of community, have been preserved.

After Brennan’s speech, the class reps walked up the stairs to stand in a circle on the landing for a candle-lighting ceremony. As the participants announced and explained each value of Thetford Academy – faith, hope, dedication, knowledge, cooperation, courage and responsibility – the students came forward to light candles. Despite the March morning wind, the ring of brightly colored flames managed to stay alight.

Joe Deffner, a longtime member of TA’s English department, called the ceremony a “sacred space” and noted the story’s relevance to modern Thetford Academy. The school has yet to return to a “normal” school year since the start of the pandemic. On the very first Founders Day, Thetford students found themselves in a similar situation. The reconstruction of the school took nine years.

The best part of Founders Day for students has always been the school-wide competition. A theme is chosen each year, and each class votes on its own topic. This year, for the theme “Decades”, different classes chose a variety of topics ranging from the Roaring Twenties to the 2010s. Classes compete in the lower division (7th against 8th grade), the middle division (9th against 10th ) or the upper division (11th vs. 12th grade).

Ava Hayden, a freshman and first-year TA student, appreciated the opportunity to get to know more people in her class. “There were a lot of people I worked with that I wouldn’t normally hang out with or get to know,” she said.

The main events always take place on a Friday, but the majority of the school week is devoted to preparation and planning. For students, it is refreshing to take a break from studying during the cold and dark winter months.

Stacy Barton, a social studies professor and TA grad, recalled that there used to be many weeks of preparation for Founders Day. “From a student’s point of view, it was really great,” she said, “[but] it has definitely changed, and I think probably for the better, from a teacher’s perspective.

During the build-up to Founders Day, the TA campus is teeming with students creating murals, centerpieces, snow sculptures, and other projects related to their classroom theme. An unofficial requirement is to make fun of teachers; faculty members are almost always depicted in a sketch or painted in an art project.

This year, the freshman class cut out pictures of faculty members and glued them onto 1970s disco dancers for their centerpiece. Deffner has been featured on the project and has been teased several times in skits, but he doesn’t take offense. “Personally, I think it’s wonderful,” he said, “and it makes me laugh.”

Each project is scored by judges (often TA alumni or retired staff members). The winning project in each category earns points for the rating. Students do their best to earn the “Founders’ Day Champion” plaque which is framed outside the school library. Winning every annual competition during their six years at Thetford Academy gives a graduating class endless bragging rights.

The students also participated in games of volleyball, water balloon throwing and tug of war to earn more points. Each class watched the skits performed by their division at the theater. This year, jokes about the school’s policies on face masks and cellphones were popular among the performances and received positively from the audience. Junior Shisi Dai, an international student from Beijing, said her favorite parts of the day included watching the sled races and seeing the senior class take on the faculty in a volleyball match.

There were also two banquet lunches: one for junior high and freshmen, and one for upperclassmen. Before the pandemic, watching skits and having lunch would have been a school-wide occasion, but both traditions have fallen victim to COVID. Students and teachers missed the community aspect of these events, some of the rare occasions when the student body comes together for anything other than an assembly.

At the end of the day, the school once again gathered in the gymnasium for a closing ceremony, during which the Founders’ Day 2022 champions would be announced. Brennan first revealed the winners of the individual contests. Applause, the stomp of the bleachers and the singing of a medley of graduation years punctuated each announcement. Finally, she declared the winners of the lower, middle and upper divisions. After much anticipation, the seventh graders, sophomores, and seniors claimed victory.

For many, Founders Day was a break from the challenges the school continues to face. A highlight for Deffner has always been witnessing the bonding of classes. “It’s good to see people working so hard on something that doesn’t have major consequences,” he said. “But at the same time, the consequences are that it’s a way to build class unity.”

“Everyone kind of encouraged each other, because we were like a big team,” she said. “I enjoyed it.”

If you want to keep tabs on Vermont education news, sign up here to receive a weekly email with all of VTDigger’s reports on higher education, early childhood programs, and school policy. K-12 education.