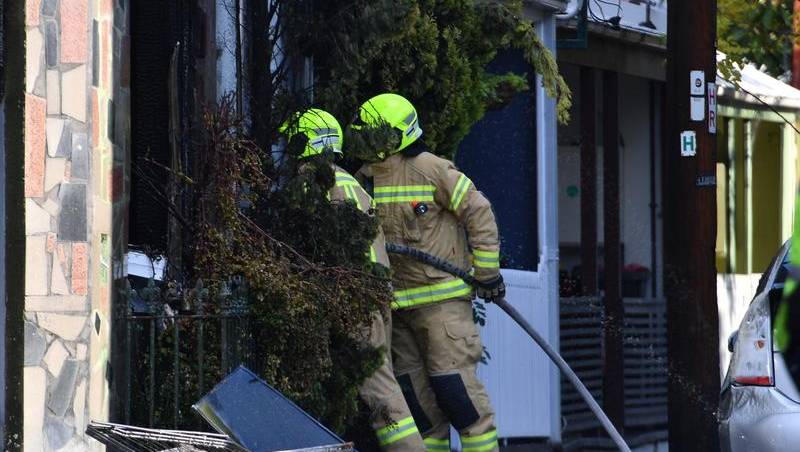 The death toll in a Sydney boarding house fire following an explosion has risen to three, after two more bodies were found in the smoldering rubble, with police investigating the blaze as murder.

“There was an explosion here in Newtown. It’s unclear at this point what caused it,” Assistant Police Commissioner Peter Cotter told reporters on Tuesday.

Police were called to the blaze at the corner of Probert and Albermarle streets around 1 a.m. Tuesday and found the two-story building well lit.

Forty firefighters were dispatched to bring the raging fire under control.

They first found a body inside, while eight residents fled the intense fire.

Three of them were taken to hospital, including an octogenarian in critical condition.

“There was…a male, about 80 years old, who jumped out, fleeing the flames through the first floor window,” Mr Cotter said.

“He suffered serious leg injuries and was transported to North Shore and unfortunately suffered a heart attack in hospital. He is in critical condition while the other two occupants are in stable condition.”

Police said later Tuesday they had found two more bodies and there were “serious concerns about a fourth person believed to be inside”.

Injuries to those who escaped from the boarding house, mostly men in their 40s to 80s, included smoke inhalation and minor braces.

Police said they were treating the matter as “suspicious” and were seeking to question the owner of the boarding house.

“We know who he is. We’ve contacted him in a series of addresses in western Sydney and haven’t been able to get in touch with him yet,” Mr Cotter said.

Seven teams of ambulances were sent to the blaze.

“We treated a number of patients for a variety of injuries including burns and smoke inhalation, three of which required hospitalization,” paramedic Braden Robinson said.

“A person living in a boarding house experiences a form of homelessness,” he said.

There were not enough places available for people in need of affordable housing and some pensions were inadequate.

“Residents will likely struggle to find a new place to stay and that’s not good,” Mr de Groot said.

“As a community, we need to do more to protect our most vulnerable.”

There are 50,000 applicants – representing more than 100,000 people – on the waiting list for social housing in NSW and many more are in need of affordable housing.