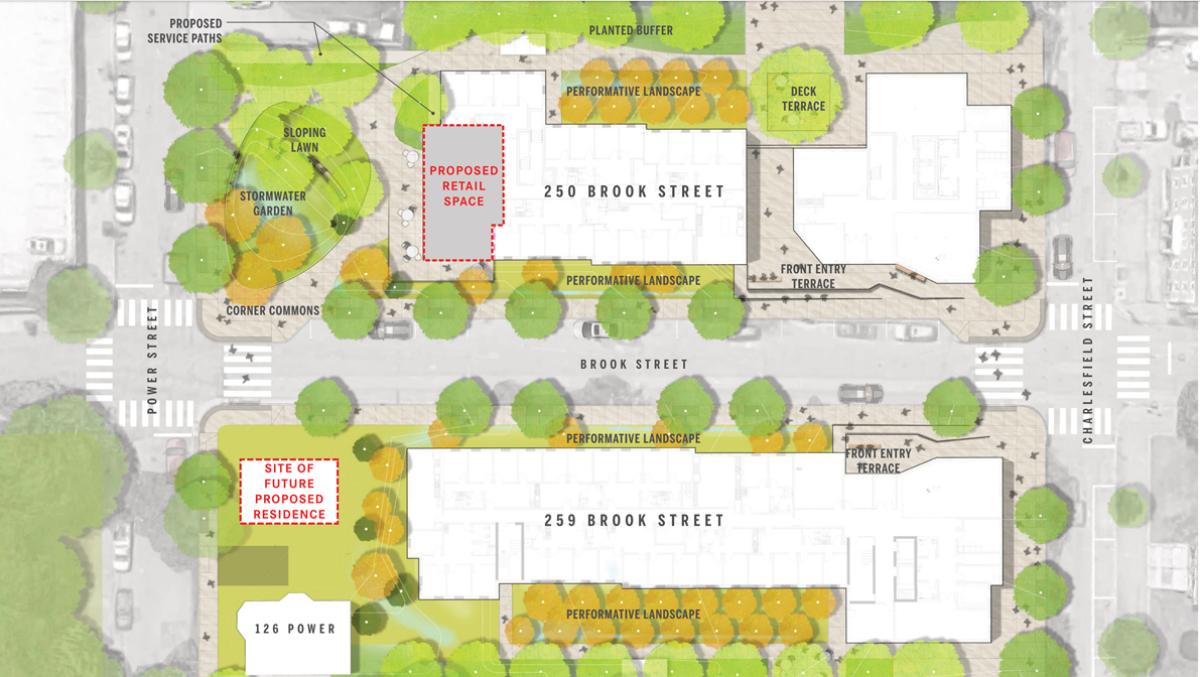 The Providence Journal reported that the biggest projects will be the construction of two new residence halls on Brook Street, near the Power Street parking lot and the Vartan Gregorian Quad. (Courtesy of Brown University)

Brown University, an Ivy League college in Providence, RI, will fund the construction and renovation of three ongoing campus projects with $100.7 million raised through a bond.

The Providence Journal reported in August that the biggest projects will be the construction of two new residence halls on Brook Street, near the Power Street parking lot and the Vartan Gregorian Quad. The buildings will house 350 third- and fourth-year students, according to Brown’s website.

Together, the two buildings will comprise 125,000 square feet of space.

Initial plans, according to the news source, called for Brown to build a 375-bed dormitory, which was later reduced to 350 beds, and retail space was added to one of the buildings.

Like much of the Brown Campus, the buildings are mostly brick, with texture and detailing at windows and corners, and accents of terra cotta and wood. The interior structure features cross-laminated timber, which minimizes the environmental impact of each residence, giving the interior ceilings a warmth visible from the street, according to a description on Brown’s online project page.

The two new dormitories, under construction at 250 and 259 Brook Street, replace a small strip mall and parking lot.

The final steel beam was put in place in July.

While the university only borrowed $87.2 million, it was sold at a premium of $13.5 million, raising a total of $100.7 million for the university, the report said. RIHEBC Executive Director Kim Mooers in a press release. Since 1968, the company has facilitated a total of 27 bonds for Brown, worth $1.3 billion, RIHEBC noted.

In a separate deal, Brown recently purchased 10 properties in Providence’s jewelry district for $16 million from Care New England, with plans to build a new lab in that part of town.

Additionally, the university purchased the 174 River House apartments on Point Street, also in the Jewelry District, for $75 million in 2021. This building is intended to become housing for graduate students.

Brown was also a central player in the redevelopment of the former power station next to River House in Providence’s South Street Landing complex, which houses Brown’s offices and a nursing training center for the University of Rhode. Island and Rhode Island College.

Churchill House to get more space

Some of the money Brown received will also be used to build an extension to Churchill House, at 155 Angell St., which is to include space for the university’s African Studies department and the Rites and Reason Theatre, learned the Journal.

According to Brown’s website, the building, first built in 1907 for the Rhode Island Women’s Club, will undergo a complete renovation, including a two-story addition that will add 3,000 square feet, a new deck and an updated entry.

An extensive study by the university has concluded that the addition and renovation of Churchill House is necessary due to the growth of the African Studies program.

Brown’s Lincoln Field Building on the Simmons Quadrangle is another beneficiary of the multi-million bond sale as it will pay for a new addition to the structure, the Providence newspaper reported. The building houses the university’s Department of Earth, Environmental and Planetary Sciences.