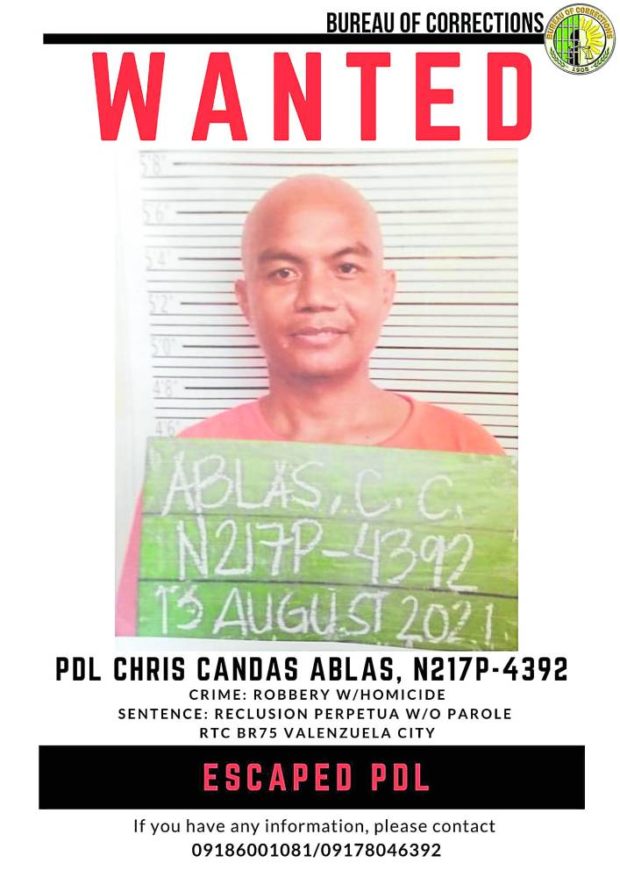 Not three but four inmates locked down the maximum security compound of New Bilibid prison on Monday, the Bureau of Corrections (BuCor) has learned.

Deputy Secretary Gabriel Chaclag, a BuCor spokesman, said on Tuesday that the fourth inmate, Chris Ablas of dorm 8C, had been confirmed missing.

“That means there are two missing people who are still at large,” he said, referring to Ablas and Drakilou Falcon, one of the three inmates originally reported to have escaped.

Falcon, 34, is serving a 24-year sentence after being convicted of robbery with homicide and unlawful possession of firearms.

He is also on trial on two counts of murder, frustrated murder, attempted murder and robbery at Camiling Regional Magistrates Court in Tarlac Province.

The two inmates who escaped with Falcon – Pacifico Adlawan, 49, and Arwin Bio, 35 – were killed while being pursued by BuCor staff and Muntinlupa police.

Ablas is serving a life sentence (maximum 40 years) without parole for a bank robbery in December 2004, which left one police officer killed and several others injured.

He and 12 other people were sentenced by the Valenzuela Regional Court of First Instance in January 2018.

The BuCor said the maximum-security compound remains on lockdown amid a manhunt for the two escapees.

The prison break occurred despite heightened security in Bilibid, with BuCor installing additional walls and gates, to which the city government and residents of Muntinlupa and even the Ministry of Justice, its parent agency, objected.

The BuCor is offering a 100,000 peso reward to anyone who can provide information on the two escapees, whom it described as “armed and dangerous”.

He said the award money would come from the “collective contribution of BuCor staff”.

—WITH A REPORT BY DONA Z. PAZZIBUGAN INQ