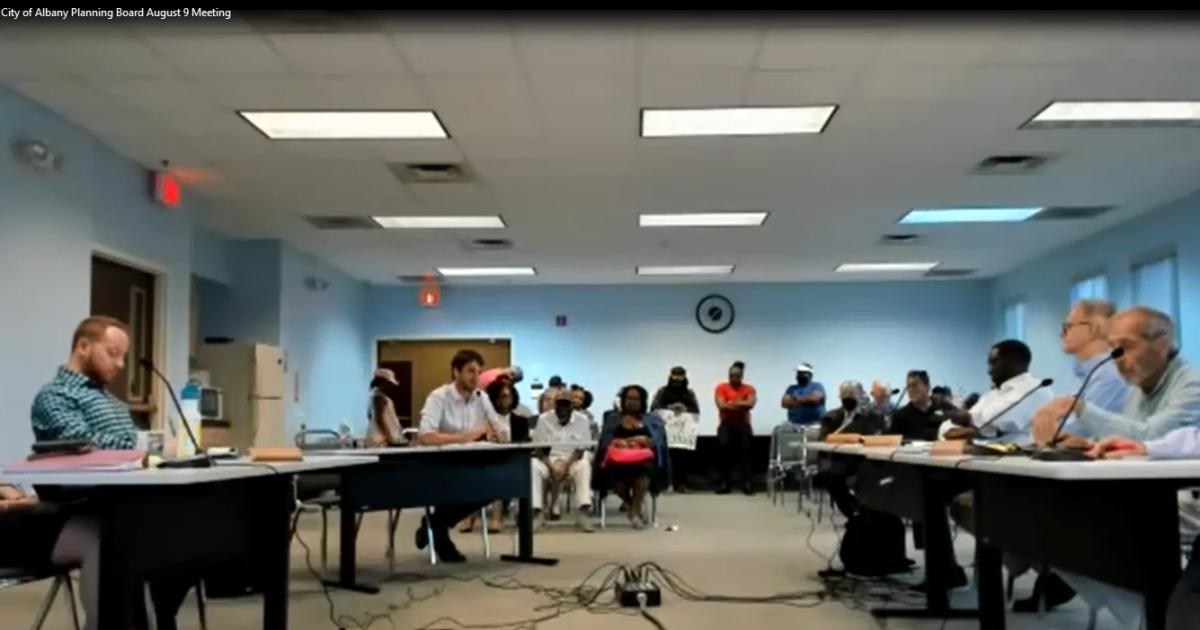 On Tuesday evening, the Albany planning board held another session to consider the Capital City Rescue Mission’s proposed $6 million expansion, which includes the construction of a dormitory that can accommodate more than 200 people.

Neighbors and local businesses near the shelter at 257 South Pearl Street have long complained of drug use, vagrancy, prostitution and theft that they believe are associated with the Mission. The shelter is looking to add approximately 31,000 square feet to its current building.

Albany County Legislator Sam Fein lives near Grand Street. He says the mission should never have been allowed to open near Giffen Memorial Elementary School.

“I think we all know that would never have been approved in a more affluent neighborhood, in a white neighborhood,” Fein said. “Well, I think it makes absolutely no sense because of that, to expand it. You know, the mission should move, but at the very least, we shouldn’t expand the Mission there. You know, there’s over-concentration, there’s already services in the South End. You know, people have been talking tonight about the economic impact of the area, that corridor on South Pearl Street, businesses can’t survive, the businesses leave. And a big part of that is the mission.

The founder of A Block at a Time, Danielle Hille, lives a few blocks away. She testified at the meeting that annual reports posted on the Municipal Mission’s website show that the facility is currently underutilizing two new buildings.

Hille tells WAMC that the opposition is not against those who live without shelter or their ability to live safely and with dignity. She says the Mission needs to be a better neighbor before talking about expansion.

“They need to learn how to manage their guests better, to make sure that they, the Mission and their guests, are good neighbors to the rest of the neighborhood, that they don’t cause harm to our children,” said Hille. . “One of the speakers said, it was absolutely perfect, ‘Our children shouldn’t have to go through despair every day. They shouldn’t have to start their day in despair.’ And in any other neighborhood, it wouldn’t have been allowed so close to a school. It’s not in the best interest of our children. And, you know, the community needs to try harder this this time to ensure that we do not continue to be harmed by the City Mission’s lack of accountability.

Daniel Hershberg of the law firm Hershberg & Hershberg represented the mission at the board meeting.

“The Capital City Rescue Mission has been there for a long time at the corner of Arch and South Pearl [and] has grown over the years,” Hershberg said. “Other facilities currently operated by Capital City Rescue Mission are area affiliates that also serve the same purpose. There are accommodations for women and accommodations for women and children. They are similar facilities. So I guess the question of neighborhood consistency is a function of what you’re compatible with, certainly compatible with other uses in the immediate vicinity. So basically we don’t think it rises to the level of needing a positive statement and an environmental impact statement.

Nevertheless, the next step in the expansion is an environmental impact study.

Hille says there will be more opportunities for community outreach and public comment. She says leaders create a positive narrative about the mission by omitting the negative effects on the community.

Mission director Perry Jones could not be reached for comment. The planning council then meets on August 23rd.