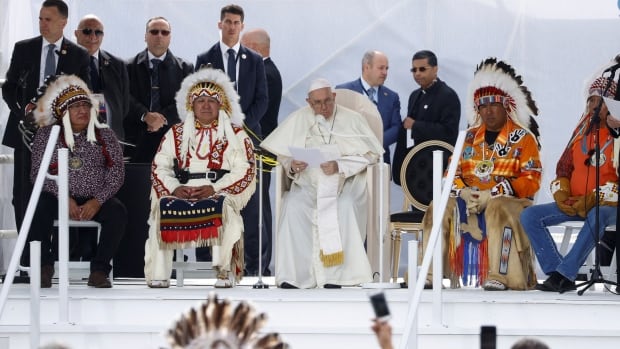 CBC News: The House48:32CBC Radio’s The House: TRC calls for action — what’s next?

On this week’s show: In a special edition of The House, guest host Niigaan Sinclair sits down for a chat with his father, Murray Sinclair, to discuss what the former chairman and senator of the Commission on Truth and Reconciliation thinks of the Pope’s apologies. Plus, an in-depth review of progress in responding to the TRC’s calls to action on key issues such as justice, health and education.

Indigenous leaders are divided over apologies from Pope Francis, delivered in Canada this week. Some say it responds to the Truth and Reconciliation Commission’s 58 call to action and represents a key step forward, while others argue it hasn’t gone far enough.

Murray Sinclair, the former chair of the Truth and Reconciliation Commission, presented the final report which included the 94 calls to action in 2015. Guest host Niigaan Sinclair begins The HouseThe special cover with a conversation with his father about whether the former judge and senator – one of the architects of the Calls to Action – believes Call 58 is now over and what the Pope’s visit means for the reconciliation.

To kick off a special episode of The House, guest host Niigaan Sinclair has a chat with his father, Murray Sinclair, about what the former judge, senator and TRC chairman thinks of the Pope’s visit to Canada this week.

The papal apology was number 58 on the Truth and Reconciliation Commission’s list of 94 calls to action. Now that Pope Francis has been to Canada, where do we stand compared to the rest?

The Yellowhead Institute at Metropolitan University of Toronto has published a Annual Report since 2019 that tracks progress made by governments and other organizations on appeals. Yellowhead research director Eva Jewell joins The House to review the newsletter.

Eva Jewell, Research Director of the Yellowhead Institute at Toronto Metropolitan University, joins The House to discuss progress on the Truth and Reconciliation Commission’s 94 Calls to Action.

The first five calls to action focus on child welfare – and reducing the number of Indigenous children in care is at the top. The House hears Huu-ay-aht First Nation councilor Edward Johnson explain how his community has made progress in preventing some of its children from being taken from their homes.

Next, University of Regina professor and Sixties Scoop survivor Raven Sinclair talks about the progress of those appeals.

Of the first 42 Calls to Action addressing the legacy of residential schools, 18 focus on justice.

John Borrows, Loveland Chair in Indigenous Law at the University of Toronto Faculty of Law, explains why there are so many justice-focused calls to action and explains why so many people this week called the pope to revoke the “doctrine of discovery.”

CBC News: The House9:49Advances in justice

John Borrows, Loveland Chair in Indigenous Law at the University of Toronto Law School, discusses the justice-focused calls to action of the TRC.

Earlier this year, for the first time in decades, a First Nations community in Saskatchewan experienced a traditional Aboriginal birth. In Sturgeon Lake First Nation, a baby was delivered in a healing lodge with the help of aboriginal midwives and in a traditional ceremony.

It was a significant moment both professionally and personally for Norma Rabbitskin, head nurse at Sturgeon Lake Health Center and grandmother of the newborn. Rabbitskin explains how she is working to implement Call Number 22, which urges recognition and integration of Indigenous healing practices.

Norma Rabbitskin, chief nursing officer at Sturgeon Lake Health Centre, speaks about the birth of her grandson – the first traditional Aboriginal birth in the community in decades – and the TRC’s call to action regarding the practices of indigenous healing.

All Canadian provinces and territories include aspects of Indigenous education in their schools, but not everything is compulsory and the age at which children learn it varies. In addition, cuts to government funding for Indigenous education are putting additional pressure on educators.

Colinda Clyne, Coordinating Director of Indigenous Education at the Upper Grand District School Board in Guelph, Ontario, discusses what needs to be done to respond to calls to action on education.

CBC News: The House6:39Commitment to Teaching and Funding Indigenous Education