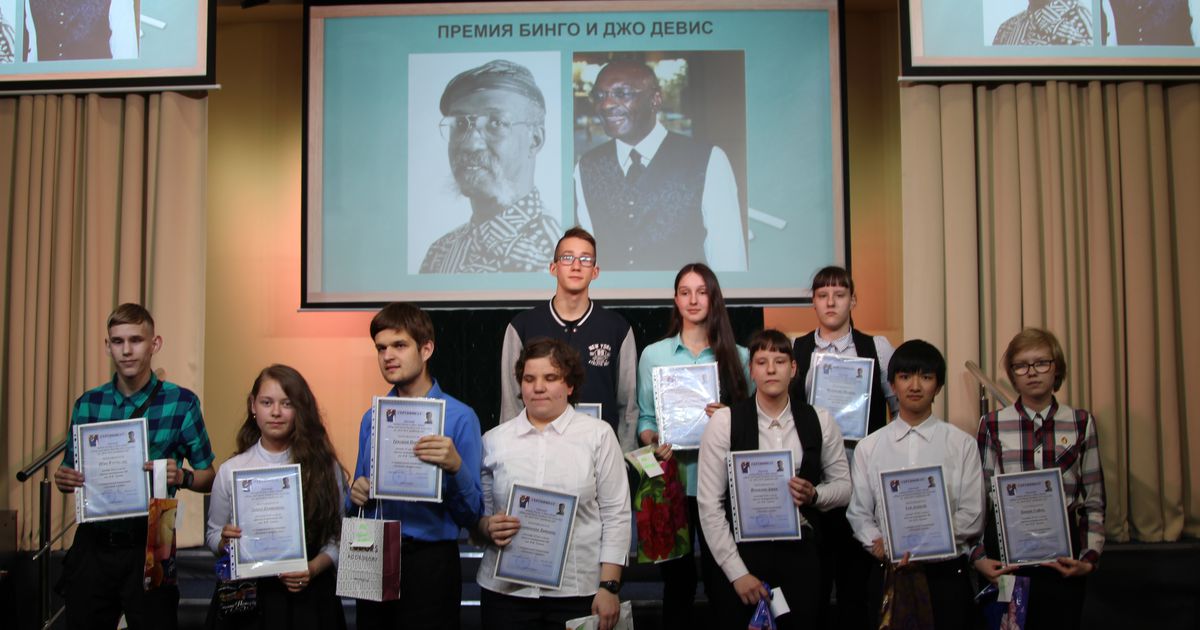 “The fact that on the other side of the world there are people who care about them, think about them and respect them is very important.”

But that tradition was cut short this year, an unfortunate victim of US sanctions on Russia for its continued, unprovoked invasion of Ukraine. Modest monetary prizes — sent to students each year by internationally acclaimed Dayton artist and educator Bing Davis — are no longer allowed.

Although just weeks away from turning 85 and battling the return of her lung cancer from five years ago, Davis hopes to support at least one more rewards program if and when the sanctions are lifted.

After that, depending on how much time and energy he has to devote to his health issues and to be able to pursue his creative endeavors, which include his art studio Willis Bing Davis and the EbonNia Gallery on W. Third Street, he would like to see the awards continue.

He hopes that a local group – either expats from St. Petersburg who now live here, a group dedicated to the blind and visually impaired or someone from the arts community who is willing to share – could take over the project.

Davis feels a real bond with Grot’s students, their teachers and especially Artamonova, who facilitated the adventure from the beginning and became his good friend.

In turn, people at the school embraced the Davis brothers and their story.

“It’s just a wonderful experience, a wonderful humanitarian project between East and West,” Davis said the other afternoon, just before heading to Miami Valley Hospital for the third of his five treatments for scheduled radiotherapy.

“Every year they have an assembly where the teachers talk about me and my brother and East Dayton and athletics and our support for their students.

“Over the years, I think some of them have heard about Diamond Avenue, where we grew up and nowadays at Wilbur Wright High, but more generally about brotherhood and growing up in poverty. They understand all of our history and are able to relate it to their own struggles.

“And, in turn, it’s been a great way for me to remember my brother since he passed away (in 2009) and know that someone will discuss our artwork and the sporting activities we had. growing up.”

Both were All-City multisport athletes in high school. Bing then went to DePauw University, where he was a high jumper and an all-conference basketball player who is part of the school’s athletic hall of fame. Joe played basketball at Central State.

Both then turned to the arts. Bing was an art teacher at Dayton Public Schools, chaired the art department at Central State, served as assistant dean and professor at both DePauw and the University of Miami, was a visiting scholar at the University of Dayton and was artist-in-residence at Wright State. .

He works in several mediums and has presented shows and carried out projects in China, Germany, Africa and the Caribbean, as well as Russia.

Joe lived 46 years in Los Angeles, where he was a drug and alcohol counselor. Until his death from ALS, he was best known for his photography.

From a presentation of his work here in 2005 – in an exhibit that ranged from harrowing photographs of growing up in their small back enclave in mostly white, Appalachian-rooted East Dayton to shots of sports figures and top celebrities shot of Muhammad Ali and Serena Williams to Ray Chares and Snoop Dogg — we sat and talked, and he told me about the day he first photographed Sammy Davis Jr.:

“The first time I shot him was when he came on stage for an award. As he stood there I photographed his feet. He looked down and made a few jokes at this subject, but then he asked me why I had done that.

“He thanked me and soon after called me to photograph his wife at UCLA. Until he died, I worked with him.

And that’s the essence of the two Davis brothers.

They were able to see, understand and appreciate things in a way that most others do not.

“We were poor kids and we didn’t have a doodly squat,” Joe said. “But as we walked down the driveway behind our house on Diamond Avenue and some of the other streets, we were looking through the trash cans.

“Bing would receive small artifacts, broken earrings, anything he could use in his art. He found scraps of pencils, took them home, sharpened them, and used them to draw.

“I was looking for pop bottles, copper wire, anything I could sell so we got 10 cents for Jefferson Street movies.

“And then one day I found a top-view Brownie camera. I took it home and started taking pictures of all my friends.

“After a while, however, they got a little upset because they found out for the first month and a half that I had never used film. I was just, you know, practicing.

It was in this same lane behind their house that Joe set up two hurdles entrusted to him by Wilbur Wright’s athletic trainer, Dean Dooley. Although initially fearful that he could not overcome them, he eventually became Dayton’s prep hurdles champion.

In the front yard of their house, Bing built a high jump pit with an old fishing rod as a clearing bar.

One thing he and Joe couldn’t cross was an unshakeable rule imposed by their mother, Veronia. Their house was only four doors down from their church, Mount Pisgah Baptist, and she made it clear that the boys could not jump there during church services.

Veronia, who was 100 when she died in 2010, has always been the driving force in their family.

When Joe moved to Los Angeles and was first caught up in the fast-paced life — and the nearly decade-long downward spiral that came with it — he said it was his mother who told him about common sense and helped him get back on track. And that eventually led him to counsel the homeless, drug addicts, and dispossessed.

He was diagnosed with ALS – known as Lou Gehrig’s disease – in 2004, and a year later returned to Dayton in a wheelchair for the exhibition of his photographs.

The following year, 2006, Susan J. Gabbard, president of the National Art Education Association, asked Bing to be one of 30 American art teachers to attend a joint American-Russian educational conference in St. Petersburg.

The experiences of the trip struck a chord with Bing and the following year he launched the first Bing and Joe Davis Student Awards at the Grot School.

“Joe was bedridden with ALS then, but the awards lifted him up,” Bing said. “He was so happy that in his later years he could still be involved and that motivated him.

“And now it’s become a way for me to remember him and keep his memory alive.”

When the Davis boys – who also had an older brother and three sisters – were growing up, their aunt, Ada Belle Sparks, lived half a block away on Springfield Street in Irwin.

“She was blind the last 50 years of her life,” Bing said. “She lived alone, but for 10 years her neighbors didn’t know she was blind. When she took out her trash, she followed her clothesline to the trash and no one knew.

“She would sit in the rocking chair on her porch, then walk back into the house. She loved her life and she was a wonder to us.

It was this upbringing that helped make Bing so receptive when he went to Russia and ended up being assigned to the Grot School.

“Most of the other educators in our group were interested in going to plum schools with outstanding programs,” he recalls. “I said, ‘That’s good. I’ll take what’s left.

“I was sent to school for the blind and partially sighted, but once I met the people there and saw what they were doing, I thought, ‘This is where I’m supposed to be. be. That’s why I came here in the first place.

He saw some similarities to the program he ran in Dayton Public Schools in the late 1960s. Called The Dayton Living Arts Center, it was funded by a three-year, $1 million grant that explored the influence of the arts on student development through the disciplines of music, dance, drama, creative writing, and visual arts.

When he observed Grot’s students and teachers, he was particularly moved and felt compelled to do something. And so, since 2007, he has provided moderate support – sometimes $400 to $600 from the sale of a small piece of his work – for the awards.

“It’s the only award a lot of these kids get, and they look forward to it, as do their parents,” he said. “It shows that someone on the outside, someone on the other side of the world, cares about them.”

And the support is reciprocal.

Marina recently sent Bing a note about suspending rewards, but her big concern was for him and his health battle.

“I pray and hope that you face all the problems, because I’m sure you still haven’t finished your mission here on earth,” she wrote.

“Please fight and do your best. Believe in yourself and your future. We are together and our thoughts are with you.

“I love you our dear, dear Bing.

Mutual respect and understanding – and above all love – cannot be sanctioned.

Bing Davis (left) and his brother John Joseph Davis (right) at the Ebonnia Gallery in Dayton in 2005. FILE PHOTO

Bing Davis (left) and his brother John Joseph Davis (right) at the Ebonnia Gallery in Dayton in 2005. FILE PHOTO

Ministry asks Hajj pilgrims to limit their activities before departure