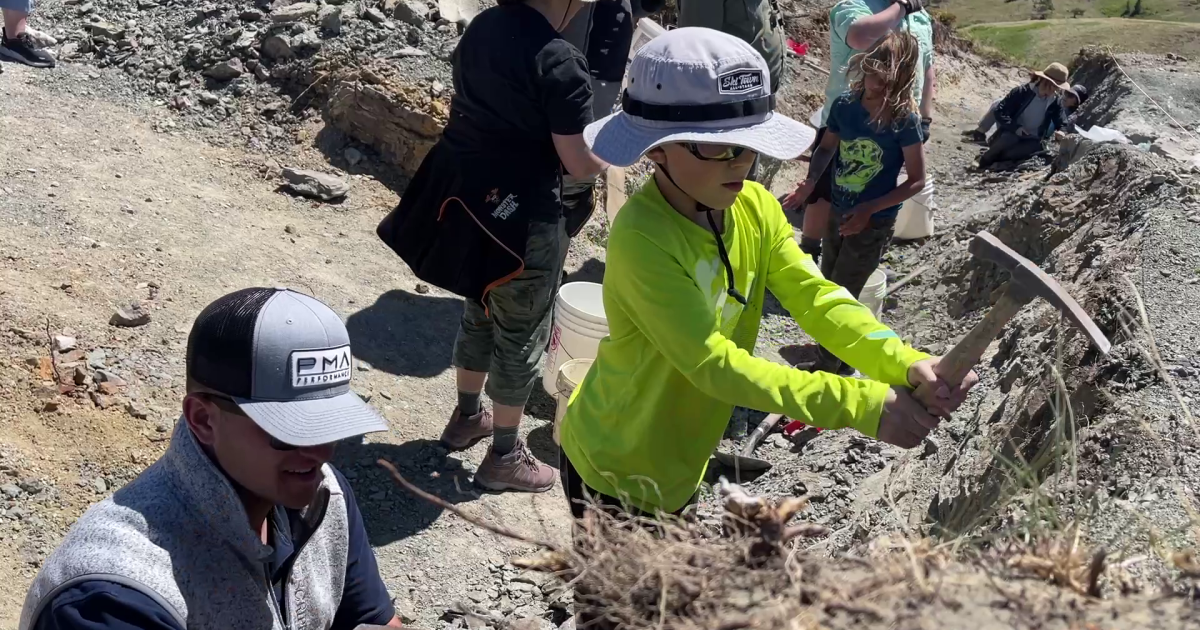 The sound of iron pickaxes echoed through the Rocky Mountains and behind the “ping” budding paleontologist and cancer survivor Noah Mills.

Digging for dinosaurs in Montana is what Noah chose for his Make a wishand last week that wish came true.

Noah explained, “I’ve been a dinosaur hunter since I was five years old.”

Noah is about to turn eight and has been cancer free for almost three years. Just as Noah began his career as “Dino Hunter”, he and his family received some heartbreaking news. They happened to be on a family vacation in Glacier National Park.

A stomach ache led to a CT scan showing a large abscess on her right kidney. Jason and Shannon Mills took their then ill son to Children’s Hospital in Denver, Colorado.

They would discover and diagnose Noah with Bilateral Wilms, kidney cancer. This was shocking news for family and friends, especially gravity – stage 5.

Whatever the milestone, it didn’t stop her mom Shannon from living every day to the fullest. “Strangely enough, I felt deep in my heart that he would be fine. As scary and as rare as it was…”

Noah was waiting up to 12 weeks of chemotherapy to shrink the tumors and surgically remove parts of each kidney. It wasn’t that easy. After the surgery, Noah would add several more months of chemotherapy treatment.

There was a guiding light throughout the process, her father said: “We all rallied around the dinosaurs.”

That’s what they’re doing today, rallying with dinosaurs as a family in Montana.

“It’s been his wish from the start and it hasn’t changed. And it’s like being at home with him, knowing him, living with him and being my little brother. You can kind of see why that hasn’t changed. And I mean, even from the age of four or five, the names he was able to say, the things he would like or remember about dinosaurs is really crazy. Told her sister, Ella Dunn.

Even though this journey revolved around Noah, his older brother Carson took time to reflect on what this whole experience has meant to him.

“He set the bar really high for me to be stronger in my life because he’s been through so much that nobody even thought about going through and, like, radiation and a bunch of operations. It kind of made me think as a person how strong I could be.

It’s a moment of reflection that this whole family has felt throughout this cancer journey.

Cory Coverdell, director of the Two Medicine Dinosaur Center, is thrilled to have a kid like Noah witness his dig. Inspire the younger generation of scientists to tell the story of the planet’s past. More importantly, this born and raised Montanese feels a sense of pride in his community as he greets the Mills with a warm embrace.

“It really comes down to being a Montananese, and that’s what you do. You help people in need and you help people do something amazing. And then you work with people to do it and do what it takes to make it a good experience.

The Mills family received an all-inclusive stay for their Make-A-Wish trip, not only from the foundation, but from community members in central Montana.

Simms’ Carol Bloom donated her entire guest house for their stay in Big Sky Country. Carol rallied the community around her and received generous donations for her restaurants, including Street Burgers and Jakers Bar & Grill in Great Falls, and Buffalo Joe’s Eatery & Saloon in Dupuyer. The Lewis & Clark Interpretive Center gave the whole family a free tour and welcomed Noah with a gift basket.

“Three years ago when we found out Noah had cancer, we were actually in Glacier…So it’s really cool to kind of come back to Montana…it ‘completes our trip’ of Noah having cancer…” said Carson Dunn, Noah’s brother.

Ending the day, Noah’s dad said with tears in his eyes, “This feeling is kind of overwhelming. know that people care. Knowing that you have a debt that you can never repay. Let people care…. It’s quite powerful…”