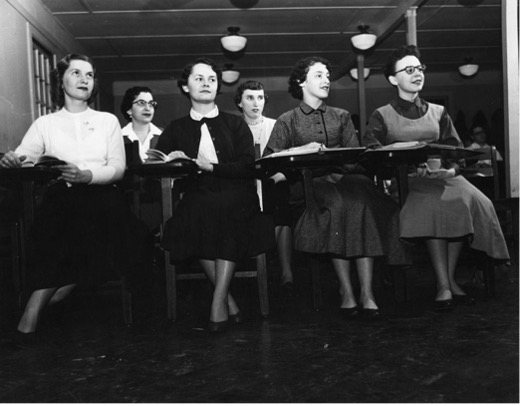 SCRANTON — America in the 1960s and 1970s was a tumultuous time in which people were swept up in the anti-Vietnam War movement, the civil rights movement and the second wave of feminism. Despite all those changes, there’s one thing that’s remained constant ever since: students at the University of Scranton sure know how to have a good time.

Here are the five most surprising things about the campus party scene in the 60s and 70s.

Karen Pennington, Ph.D., was a freshman at the University in 1972 and remembers the process.

“At the time, we had the right to organize parties in buildings. We could also have kegs… so you would go to the student government office and order your keg for the party, for the weekend. I can’t even imagine that today,” Pennington said.

It wasn’t until the early 1970s that students over the age of 21 were allowed to drink on campus. Before that, students who got caught, regardless of age, were punished. In 1968, for example, eight students were caught drinking in Aquin’s office and were placed on probation. Not only were they over 21, but among them were the president of the student government and three leaders of the student newspaper. In response, the entire student body staged a protest against the punishment, stating that they wanted autonomy to govern themselves.

Students banded together and demanded an immediate change in university policy.

“We demand that by Monday, December 2, the administration accept our position and settle into serious negotiations with the representatives of this ad hoc committee,” said a student representative.

During the first year of co-education, the administrators adopted a rule that all female students must be in their dorms by midnight. The double standard was glaring given that the rule only affected women and not their male peers.

“Some of us staged a protest in October or November to say this is really stupid. We were adults, we were 18, and the law had just passed that 18-year-olds were legally adults. And we won the fight to have our door unlocked at midnight,” Pennington said.

Another popular thing to do at U in the 70s was go to concerts on the weekends. In the disco era, going out dancing and looking for different bands was a favorite pastime. Some U students went to concerts organized by Marywood where Billy Joel performed almost every weekend before he rose to fame.

In 1972, the University made only two major changes to the campus as it transitioned to coeducation: the installation of women’s bathrooms and a kitchen in Fitch Hall, the only women’s dormitory. The idea is insulting, but the female students made the most of it.

Campus life in the 1960s and 1970s is markedly different from campus culture today; however, the royal family’s fighting spirit to enjoy their university experience is identical in every decade.