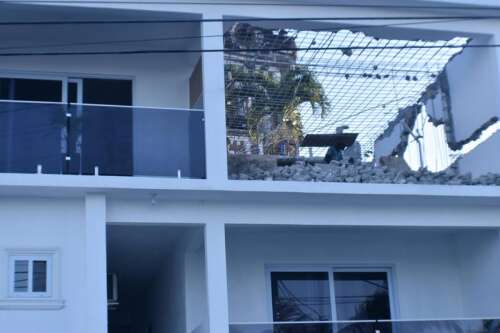 PORT ANTONIO, Portland — The Portland Municipal Corporation demolished a section of a newly renovated building after developers strayed from the approved plan. The building, on Alan Avenue in Port Antonio, is known as “Inn The Town” and is a guest house.

“We are very aware of our responsibility as the local planning authority and we may have staffing issues, but when matters come to our attention we will ensure that they are dealt with in accordance with the law,” Portland Municipal Corporation CEO Jennifer Brown-Cunningham told the Jamaica Observer.

She pointed out that the construction plans submitted to the company are the basis for decisions made during the 90-day approval process.

“When we give approval, we expect citizens to respect the approval as given,” Brown-Cunningham said. Failure to do so, she said, makes it “illegal development.”

According to Brown-Cunningham, the company was so committed to the matter that it took an injunction, a more expensive but much faster process than the normal route of taking the matter to court.

“It’s hasty; this is done in a short period of time. [It is] an expensive undertaking, but it was something we thought was necessary to tell citizens: ‘Look, the rule of law must prevail’. We made that decision, we went and got an injunction, the courts agreed with us and the order was issued for the building to be demolished and that’s what you see happening,” Brown said. Cunningham.

She pointed out that only the illegally constructed part of the building would be demolished.