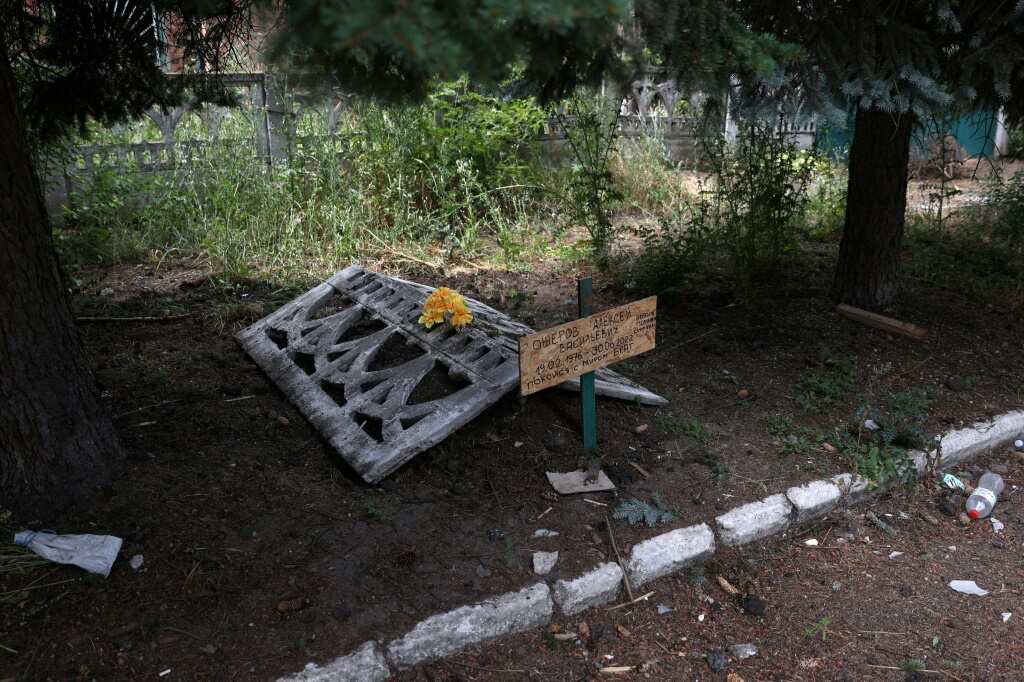 In Siversk, Ukraine, a grave dug on a sidewalk

New feature: Find out the news exactly for you ➡️ find the “Recommended for you” block and enjoy!

Oleksy’s grave was hastily dug on the sidewalk near one of the few buildings still standing in Siversk, a small town in eastern Ukraine near the frontline of the war with Russia .

The 46-year-old died in a missile strike on June 30, one of many victims of Russia’s February invasion of pro-Western Ukraine.

His final resting place outside the Siversk Cultural Center is just a small mound of dirt, topped with two concrete slabs – part of a nearby fence – that serve as a tombstone.

“Rest in peace brother. We love you, we remember you, we mourn you,” reads a cardboard sign near the makeshift grave.

A small bouquet of yellow flowers has been placed on top.

“What can I tell you? He was sitting in front of his house, there were two missiles and he was killed instantly,” says Valéry, a 56-year-old neighbor.

PAY ATTENTION: Do you like reading our stories? Join the YEN.com.gh Telegram channel to find out more!

But he has no time to share more information. In Siversk, it is dangerous to linger too long in one place.

Siversk lives and breathes fear. The town of around 10,000 before the war was shelled relentlessly for weeks by nearby Russian forces.

Its streets are riddled with huge craters, its buildings scorched by fire. Outside, stray cats and dogs play near the remains of rockets embedded in the sidewalks.

Visible through the windows of the first floor of the heavily damaged buildings, vestiges of an abandoned life: chests of drawers, family photos, overturned armchairs.

But despite the imminent danger, some people are on the streets, walking or riding their bikes, with the facial expressions of those beyond fear.

“I would like to leave, of course, but I have a 90-year-old mother, who told me she would die here. I cannot leave her,” says Oleksandr, a man in his 60s .

Five months later, anger and despair reign in the Donbass

Others do not have the means to flee the incessant bombardments.

“We have our home here, it’s our life’s work. And we don’t have the money to leave,” says Anzhela, 50, who like most people preferred to give only her first name. .

At the entrance to the underground cellars where the last civilians of the city take refuge, gas heaters are used to cook food.

But others have evacuated or are in the process of doing so as fighting for eastern Ukraine intensifies. A family drives by with a trailer carrying a refrigerator and a bicycle.

A torn Ukrainian flag flies over what remains of a building blackened by flames, likely a dormitory for workers.

And in front of a house almost reduced to ashes, lies an empty wooden coffin.

It seems that no one had time to use it for the intended purpose.

New Feature: Find out the news exactly for you ➡️ find the “Recommended for you” block and enjoy!