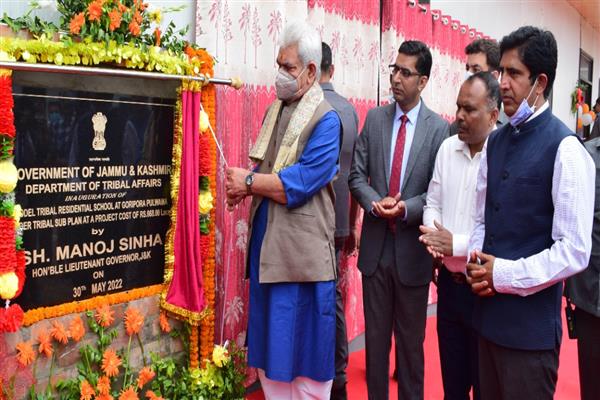 Sustained attention is paid to ensuring that quality education is accessible to people who have been deprived of their rights for a long time. New hostels, smart classrooms and a record number of scholarships for tribal students will open doors to economic prosperity and global development: LG

Since independence, the tribal community of J&K has been neglected and discriminated against. Between 1976 and 2020, only 26 hostels were created for tribal students, while 37 new hostels will be added by 2023. Over the past 21 months, steps have been taken to ensure the empowerment of all marginalized groups and lower: LG

The rights of the weaker sections enshrined in the constitution have been denied for 70 long years, the benefits of development have not been allowed to reach the last man in the queue. By removing divisive and discriminatory policies, we have made all sections of the community effective partners in the development process: LG

Pulwama, May 30 (KNS): Marking a historic day for the development of the tribal people of Pulwama, Lt. Governor Manoj Sinha today inaugurated 5 projects including Model Tribal Transit Residential School, Girls Hostel , and laid the foundation stone for 18 other projects for the welfare of the district’s tribal community.

Speaking on the occasion, the Lieutenant Governor said projects worth more than Rs 51 Crore demonstrate our commitment to social justice and equality.

Lt Governor stressed that sustained attention is being paid to ensure that quality education is made available to people who have long been disenfranchised. New hostels, smart classrooms and a record number of scholarships for tribal students will open the doors to economic prosperity and overall development, he added.

“Between 1976 and 2020, only 26 hostels were created for tribal students, while 37 new hostels will be added by 2023. Over the past 21 months, steps have been taken to ensure the empowerment of all groups marginalized and weaker,” observed the Lieutenant Governor.

Noting that the J&K tribal community has been neglected and discriminated against since independence, the Lieutenant Governor said that never before have the prospects for the tribal community been as bright as they are today.

The Lieutenant Governor said the government is making every effort to improve the sources of livelihood for the tribal people. The administration of UT is setting up 100 Van Dhan Kendras in Jammu and Kashmir so that the tribal community can get fair price for the valuable products from the forests.

He further announced the establishment of 1500 Van Dhan self-help groups in UT to make the women of the tribal community financially independent. An amount of Rs 15 crores has also been made available, he was informed.

Ensuring access to quality and affordable education for children from the tribal community, the Lieutenant Governor said the UT administration has reviewed student scholarships at different levels and increased them at all levels. levels according to contemporary realities.

For students associated with Seasonal Schools, children up to middle school always received an annual scholarship of Rs 450 to 675. A committee has been formed to look into this, and now this scholarship is increased to Rs 2400 per annum, which will directly benefit approximately 34,000 students. Similarly, review of scholarships in higher education had not been done as of 2012, and technical courses and postgraduate students also received only Rs 30,000 annual scholarship. This amount is also increased to Rs 60-80,000 per year, which will benefit 12,000 young people from the tribal community.

Recalling his pledge to establish 100 smart schools in tribal areas in November last year, the Lieutenant Governor said that in March this year the task of converting all 100 schools into smart schools was completed, which includes six such schools in Pulwama which now have the same state-of-the-art facilities available in schools in larger towns. The Tribal Affairs Department, in association with the district administration, is also developing a model tribal cluster village in Pulwama at a cost of Rs 10 crore, he added.

The Lieutenant Governor appreciated the efforts of the Department of Tribal Affairs to complete the construction of this transit boarding school in Goripora at a cost of Rs 6.68 million in record time. He said that another such boarding school is being built in Shopian and apart from educational facilities, these two boarding schools will also have medical facilities, sports facilities, library, food and other facilities. In order to ensure equal rights for girls in the field of education, the government has also established 100-bed hostels for girls from the tribal community at a cost of Rs.3.06 crores, he added.

The Lieutenant Governor observed that the administration of UT will give new energy and impetus to the social development process in Jammu and Kashmir by linking the neglected tribal community to the mainstream.

Expressing his gratitude to the Honorable Prime Minister, the Lieutenant Governor said that it was solely through his efforts that nine UT Assembly seats were reserved for the Tribal community, which truly reflects a step towards their political empowerment.

The rights of the weaker sections enshrined in the constitution have been denied for 70 long years; development benefits were not allowed to reach the last man in the queue. By removing divisive and discriminatory policies, we have made all sections of the community effective partners in the development process, added the Lieutenant Governor.

Ch Mohammad Yaseen, representative of the tribal youth, speaking on the occasion, expressed his gratitude to the Lieutenant Governor for the inauguration of the facility for the tribal people.

DDC chairpersons, PRI representatives, leaders and a large number of members of the tribal communities, the public of Pulwama as well as senior police and civil administration officers were present on the occasion. (KNS)

Opening of the 1st creative hub in Cebu on October 18

Paddle boarding season is coming to the Rock House – PCPatriot