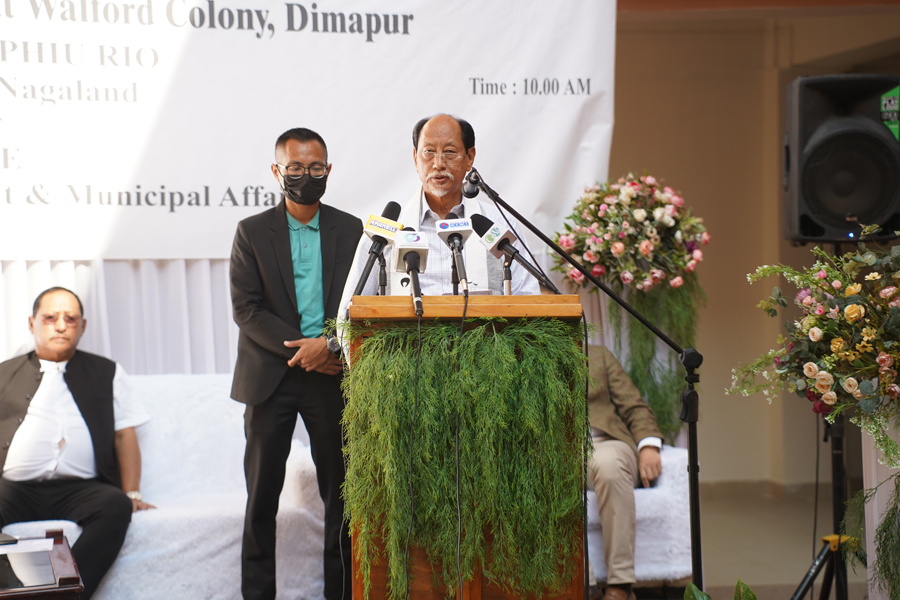 Dimapur, Nov. 12 (EMN): Nagaland Chief Minister Neiphiu Rio said on Saturday that the divestment policy is the way to go because the government “cannot do business, own and run everything”, and should just act as a facilitator, while private parties, entrepreneurs and the business community conduct the economic operations.

Inaugurating the Working Women Hostel at Walford Colony in Dimapur, Rio said the former Prime Minister of India, the government led by Atal Bihari Vajpayee first introduced the policy of divestment in India. Describing it as one of the “most visible and beneficial policies”, he said the estimated income from the divestment was INR 5,000 crore but turned out to be INR 9,000 crore.

Taking the example of an advanced nation, the Chief Minister said that all government policies are only aimed at facilitating, guiding, training and assisting (entrepreneurs); everything is privatized from the smallest to the largest.

“So, it’s time for a change,” he said, adding that the mindset of leaders should focus on nurturing and nurturing young entrepreneurs as young people rise to the challenges.

He said people are now completely dependent on the government and the state economy is a wage economy.

Rio also congratulated the Ministry of Urban Development and Municipal Affairs for the successful completion of the building, an initiative undertaken by the Center.

“This housing is specifically for urban women living in poverty and slum dwellers, and it will accommodate single working women, widows, divorced women and single mothers,” he said.

Arguing that the state is experiencing rapid urbanization, Rio said the 51-unit hostel would be useful and praised the Northern Angami Public Organization (NAPO) for donating the land for the construction of the facility. . He also paid tribute to the pioneers of NAPO who had a far-sighted vision for the people.

Rio urged people to “live positively and gradually”; not getting discouraged when others criticize but continuing to do good things for others.

Speaking at the inaugural program, NAPO President Zeneituo Yano thanked the pioneers of the organization for allocating the area to the people and expressed his joy that the land had been put to fruitful and beneficial use.

Yano said it was a source of pride for each of them to have a beautiful building right in the center of the city, and it was their duty to uphold the sanctity and protect it wholeheartedly. . He also thanked the government ministry for the facility.

Providing the technical report, the executive engineer of the municipal affairs department, Theruovituo Pienyu, said that the project was sanctioned on March 30, 2016 through a lump sum program from the Ministry of Housing and Urban Poverty Alleviation for an amount of INR 9.86 crore.

The total area of ​​the building is 3456 square meters, comprising 51 rooms including a children’s nursery, a disabled unit on the ground floor and a conference room.