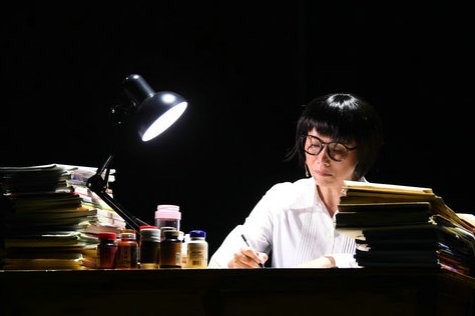 About two decades ago, Zhang encountered a teenage girl sitting in a daze on the side of a road in Huaping County, Yunnan Province. Zhang, a local high school teacher, asked her what was wrong. The girl told Zhang that she wanted to go to school, but her family was too poor to afford it.

Zhang went to the 14-year-old girl’s home, hoping to persuade her parents to allow their daughter to continue her education. However, Zhang’s parents refused. With the little girl lingering in her mind, Zhang tried to figure out how to help local girls who can’t pay their school fees because their parents usually save money for their sons instead.

In 2007, Zhang was elected as the representative of the 17th National Congress of the Communist Party of China and attended the meeting in Beijing. A report on Zhang helped her ambition to build an all-girls school catch the attention of Huaping County officials and other supporters. A year later, Huaping Girls’ High School, China’s first tuition-free high school, opened and enrolled 100 students, with Zhang as president. Most of the girls came from mountainous regions. Many had physical disabilities or were orphans or children of single parents.

Zhang’s story was adapted into a Chinese play, titled Professor Guimei, from the Yunnan Drama Theater, which launched a nationwide tour visiting eight cities with 11 performances. On August 9, the play will make its debut at the Poly Theater in Beijing.

Directed by Wang Baoshe, who is also the playwright; and Chang Hao, the Chinese play premiered in Kunming, Yunnan Province in June 2021, starring award-winning actress Li Hongmei in the lead role.

According to Chang, right after preparations for the play began, members of the creative team visited Zhang frequently and did interviews with her, trying to keep the script true to its story.

Zhang was born in 1957 in Heilongjiang province in northeastern China. After graduating from Lijiang Normal School, Zhang moved with her husband to Dali, Yunnan Province, where they were both teachers.

Following her husband’s death in 1996, Zhang moved to Huaping, where she taught at a school during the day and ran a children’s home in her spare time.

Zhang has donated more than one million yuan ($148,200) to the school over the past three decades, having meager savings for herself. She lived in the school dormitory with the girls.

In July 2021, she was one of the recipients of that year’s July 1 Medal, the highest honor given to a member of the Chinese Communist Party, for outstanding contributions to education in the mountainous region.