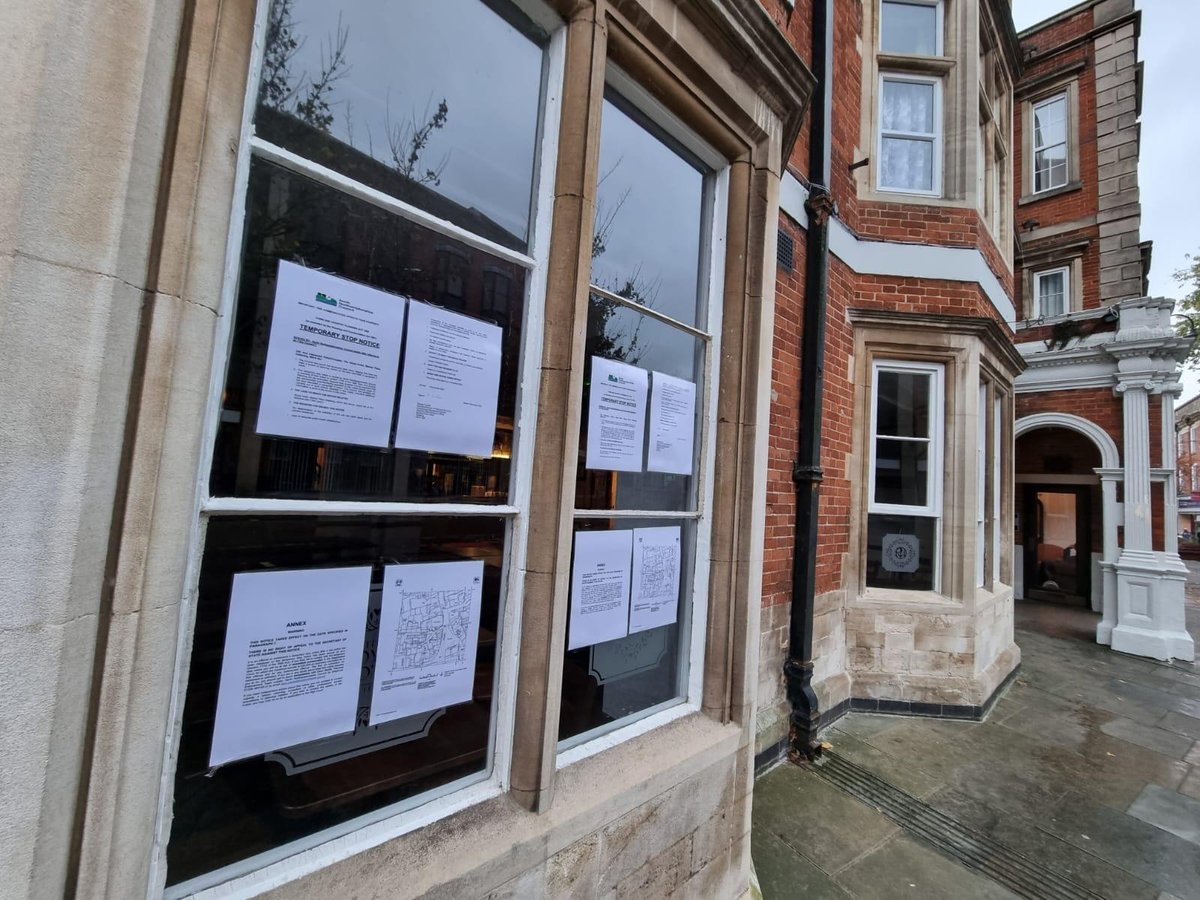 Counsel said he was considering his options after a High Court bid to stop a hotel in Kettering being used to house asylum seekers was rejected.

They asked for an interim injunction, seeking to stop the proposal and allow more time to seek alternative places to stay for asylum seekers while their refugee claims are being assessed.

The stop notice in the window of the Hotel Royal

That request has since been denied, but council leader Cllr Jason Smithers (Con) said a temporary stop notice they had also issued remained in effect. The notice orders that the location not be used as a home for asylum seekers, alleging a breach of planning control, and is valid for 28 days from November 4.

Cllr Smithers said: ‘North Northamptonshire Council takes its responsibility to asylum seekers very seriously. The council have already offered to have discussions with the Home Office to help identify suitable hotels in the area and we welcome any information they can provide that will enable us to locate suitable alternative accommodation.

The temporary shutdown notice served on Payman Holdings 5 ​​Limited, which is posted in the windows of the hotel, alleges there has been an “unauthorized” change in use of the site. He warns of the risk of prosecution – with a fine of up to £20,000 in magistrates’ court – for breaches.

The Home Office plan was brought to the council’s attention on October 27. Cllr Smithers said they were told asylum seekers could have come to the hotel on November 4 – the day they applied for the interim injunction.

In a statement, counsel said applications for emergency injunctions are considered by the courts without notice to defendants and without the opportunity for them to make representations until a later date. They said the court determined they did not want to consider the claim on this basis and instead all parties should be given an opportunity to be heard from the outset. Counsel’s statement indicates that their claim was dismissed on this basis and the merits of the claim were not considered.

Amid criticism of the council’s decision to use taxpayers’ money for the failed injunction bid, Cllr Smithers said they spent less than £200 on it – and said it could have been a much bigger problem if the asylum seekers had arrived that night.

He said: “We are happy to step in and help, but it’s all about having the right location.”

NNC is now considering whether to reapply for an injunction with notice and is awaiting the results of other local authorities who have also taken legal action. Other councils including Fenland, Ipswich and East Riding of Yorkshire have made similar requests.

Cllr Anne Lee (Lab, Windmill) said some labor councils have taken in asylum seekers after networking with voluntary organizations and churches, and the local mosque is ready to help. But she said that because the system is ‘broken’, health care, housing and social services are so understaffed and underfunded that there ‘seems to be no place in the hostel. “.

The hotel, which once hosted Queen Victoria, had been bought by investment firm Paymán Investments, who wanted to restore it to its former glory and turn it into a community center, as part of a $2.2 million deal. pounds sterling last year.

A Home Office spokesperson said it was not commenting on operational arrangements for individual sites used to house asylum seekers.

The spokesperson said: “The number of people arriving in the UK in need of accommodation has reached record levels and has put our asylum system under incredible pressure.

“The use of hotels to accommodate asylum seekers is unacceptable – there are currently over 37,000 asylum seekers in hotels costing the UK taxpayer £5.6 million a day. The use hotels is a short term solution and we are working hard with local authorities to find suitable accommodation.