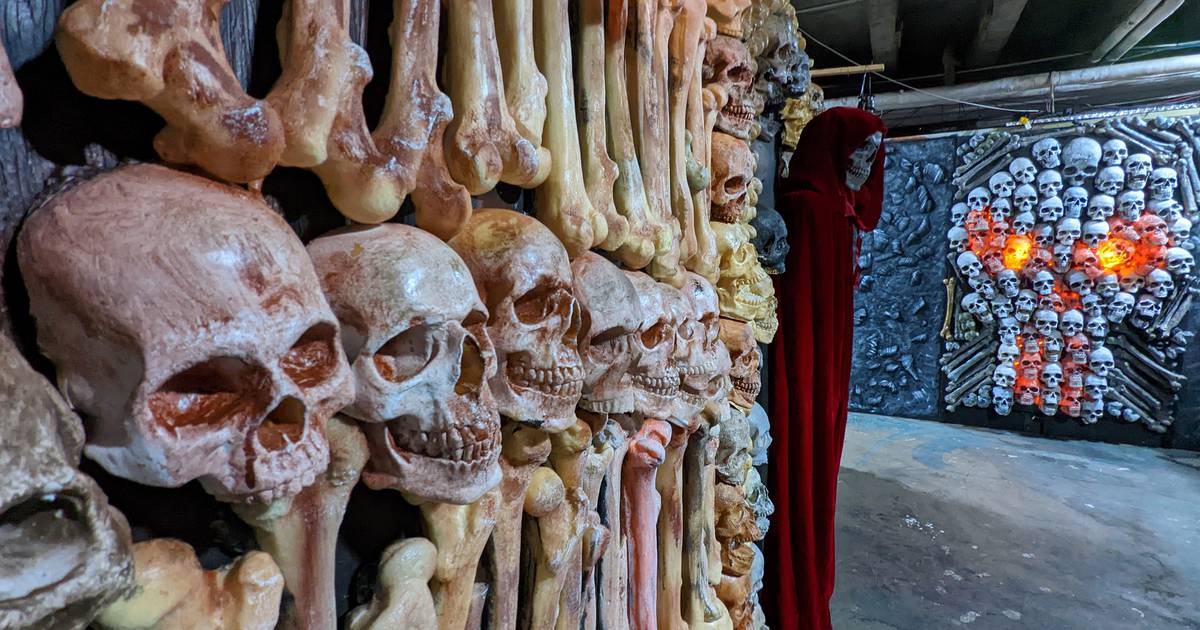 Dr. Linderhall, a scientist as mad as can be, has devised a method to extract people’s worst fears from their subconscious to create a mortifying museum of the macabre known as the Nightmare Factory.

Jenna O’Day found herself wandering the dark recesses of the Nightmare Factory when she was just 11 years old and a student at the Oregon School for the Deaf. This nightmarish excursion led to a dream job. “I love this place,” said O’Day, now 20. “It really changed my life. I’m a makeup artist now.

Nightmares, of course, are just tricks played by the mind. The same goes for Nightmare Factory, with the help of fictional characters Dr. Linderhall and Mr. Booger who give the Salem haunted house experience its theme.

However, the 32,000 square foot haunted house at the Oregon School for the Deaf in Salem has a very real effect on O’Day and the dozens of students and alumni who work as actors and entertainers behind the scenes every Halloween to send a friendly chill. the backs of visitors.

“I’ve learned a lot over the years here,” O’Day said. “When I started working in fifth grade, I didn’t know anything. I just did my own makeup. Then maybe in eighth grade, I started getting more involved with makeup artists, and I fell in love with it.

Ed Roberts, a student life counselor at the school, spearheaded the creation of the haunted house under the boys’ dorm in 1987. The Nightmare Factory has since become the longest running and largest Halloween haunted house experience in Oregon – and the only one in the country run by a school for deaf students.

“I can teach my students how to run a business, how to show the hearing world that they can do anything but hear,” Roberts said. “It’s a bridge to the hearing community for my kids.” The Nightmare Factory is also the school’s most lucrative fundraiser, bringing in thousands of dollars to pay for additional academic programs, computers, and even new drinking fountains.

The Nightmare Factory took two years off when reality staged its own horror show with the pandemic. Returning visitors this year can expect the unexpected, Roberts said. “You just can’t give people the same show every year,” he said. “We have never. We always bring something new.

The character of Dr. Linderhall first came onto the scene in 2010. Before that, it was a classic haunted house with creepy rooms where things jumped up. “There really was no working storyline,” Roberts said. Now two separate areas revolve around Dr. Linderhall and Mr. Booger, one of his unfortunate patients.

“People get to know them, and then they look forward to the next chapter with this character,” he said.

“With Desolation Alley and Mr. Booger’s Funhouse, you get two haunted houses for the price of one,” Roberts said. “A lot of haunted houses will have one and then have you lined up for the next one. Ours is one after another. It has a rhythm. It’s like a horror movie. It’s an interactive theater and interactive.

All have a suitably spooky setting, but there’s one thing that particularly spooks 19-year-old actor Izzy Thackery. “The dolls are the scariest part,” she said. “I can’t stand dolls.”

There’s a psychology behind scaring people, Roberts said. “It’s the art of distraction. You think something is going to happen, but something you didn’t expect happens instead. There’s so much going on visually that you haven’t taken the time to look at the thing here that’s actually going to come out and grab you.

Being a school for deaf students also influences the nature of the scares, he added. “We design it to be extremely visual,” he said. “We don’t depend on verbal action. There’s no one in there with landlines. Everything is visual. The lair is designed to let students know that someone is coming to the next room.

Thackery plays a creepy clown character. “They’re not expecting me,” she said. “I appear out of nowhere.”

She started performing in the Nightmare Factory when she was in seventh grade at school. “I love pretending to be someone else,” she said.

O’Day said she never wanted to practice the acting arts anywhere else. “This is my house,” she said. “That’s where I started. I think it’s important to share my talent with other people. It is also educational. It’s about learning how to wear makeup, looking to the future, building a career. That’s how I became who I am today.”

Along with Dr. Linderhall and Mr. Booger came the actual character of Rob Zombie. The singer, songwriter and filmmaker brought his taste for the macabre to the haunted house in 2010 when it was featured on the ABC reality show “Extreme Makeover: Home Edition.”

Zombie helped create a Ghoul School and Zombie Ball while teams seismically reinforced the structure, installed flooring, and added new props and animatronic characters to the Nightmare Factory. School officials agreed to keep the “makeover” touches intact for a year, but Roberts said the hauntings have since moved on.

“It works all year round,” he said. “We are already preparing for next season’s haunted house.”

Some 80 students, alumni, staff and community volunteers work at the Nightmare Factory. “Haunt Mom” ​​Jan Sykes, the senior dorm counselor, makes sure they each get a hot meal before going to work.

“It could be chicken noodle soup one night or a taco bar,” Roberts said. “Everyone gets a nice hot meal before going anywhere. Then at the end of the evening, we have a dessert for everyone. As this is a volunteer program, we want everyone to know how much we appreciate them.

The Nightmare Factory has become a multi-generational tradition. “I have parents of former students whose children are now active in the haunted house,” he said. “It’s a tradition now in Salem. We’ve been doing it for a very, very long time. This is the tradition within the school. It’s part of the culture now.

IF YOU ARE GOING TO

—Tom Henderson, for The Oregonian/OregonLive