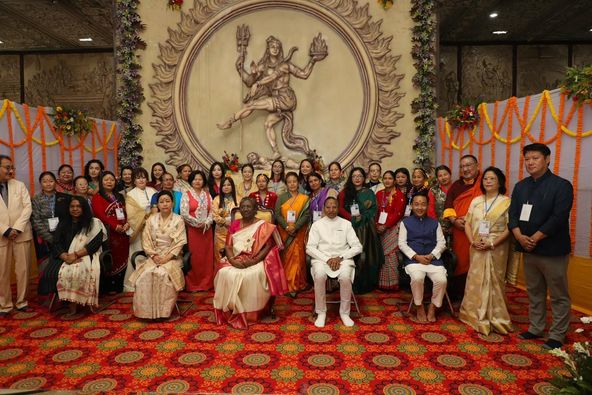 President of India – Draupadi Murmu, arrived at Siddheswara Dham VIP guest house in the morning after his helicopter landed at Namchi heliport.

The President was accompanied by the Governor of Sikkim – Ganga Prasad. Upon his arrival at Siddheswara Dham, the President was warmly welcomed by the Chief Minister – Prem Singh Tamang, his wife – Krishna Rai, Cabinet Ministers, MPs, Chief Secretary (CS), Additional Chief Secretary (ACS), the Director General of Police (DGP), the Deputy Director General of Police (ADGP) and other state officials.

The president and his entourage visited the Siddheswara Dham on Solophok Hill, about five kilometers from Namchi. The ‘Rudra Avhishek Puja’ was performed by the priests at the Shiv Mandir.

She further interacted with 26 members of Self Help Groups (SHGs) and women entrepreneurs in Sikkim. The President visited exhibits including demonstration stalls of Raddi/Lukuni weaving, Thanka painting, carpet weaving and hand weaving, etc.

During his two-day visit to the state, Murmu practically inaugurated/laid the foundation stone for various projects in education, health, road infrastructure and tourism at Manan Kendra in Gangtok on Friday.