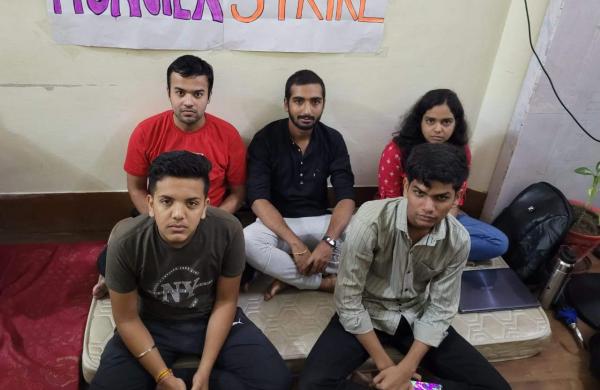 Students at Dharmashastra National Law University (DNLU), Jabalpur in Madhya Pradesh, went on an indefinite hunger strike today, August 24, after several days of protesting against maladministration by law enforcement officials university and the lack of basic necessities on campus.

The students also demanded the resignation of the Vice-Chancellor, Professor V Nagaraj.

What problems do students face?

University students have claimed that the current campus where they are studying is a rented campus with disastrous infrastructure. “The new campus was supposed to be built in 2021 but it hasn’t started yet. The current campus has seeps everywhere,” said a fourth-year law student at the university who wished to remain anonymous.

In a written representation to the university administration with detailed requests and supporting photos, the students stated that “despite being charged large sums in the name of campus development costs and maintenance costs , no work was done on campus. The main playing field is in a terrible state. The ground is not maintained, putting the lives of the students at risk as it serves as a breeding ground for poisonous snakes, insects and the like. In fact, the maintenance expenses of the grounds touch Rs 18 lakh per month and it is the students who still have to pay, they cannot use it, Jain said.

In addition, students also demand an investigation into the operation of the Internship and Placement Unit (IAPC) on campus. “Although we are in our final year of law school, the VC told us that they could not secure placements or internships for us,” said one student who wished to remain anonymous. Although there is a placement cell on campus, it is not functioning well, the student said. In fact, in the written representation, the students said that IPAC members are only responsible for the tedious work – like maintaining the directory, sending emails, making calls, etc. “They have no opportunity to put forward the interests of students and are not involved in decision-making of any kind,” he added.

The students also claimed that apart from a 10% increase in fees, they were also asked to pay accommodation fees during the COVID-19 pandemic when hostels were not in use. “We had to pay Rs 60,000 – Rs 70,000 per month for hostels even during this period,” said a first-year law student. Although the University Grants Commission (UGC) has previously ordered all universities and colleges to promptly reimburse hostel and mess fees taken during the COVID-19 pandemic or adjust them in other fees, the DNLU students said their fees hadn’t yet been refunded.

While highlighting cases of arbitrary fines imposed on students, Jain recalled an incident in which a female student was fined Rs 5,000 for “damaging the reputation of the institution”. “This happened after she sent an open letter to the VC pointing out mismanagement by the principal and other officials when she was injured on campus and there was a delay in getting the right meds,” Jain calmed down.

The fate of female students

Several female students at the university also recounted instances of sexism on the part of the principal, guards and other university officials. “They openly comment on girls’ clothes and call us ‘characterless’ and ask why we wear ‘short clothes’,” shared a law student who wished to remain anonymous.

She added that the Sexual Harassment Grievance Redress Cell on campus is headed by the principal who is the one who makes such comments about them. “We were asked not to wear short clothes and to use the toilets as they are near the boys’ hostel and they might end up seeing us,” she said. They also allege that they have to walk half a kilometer to use the toilets, which are not well maintained.

Additionally, on several occasions, unauthorized individuals carrying out construction work on campus broke into women’s hostel rooms, they claimed. “There is no one to watch who enters our rooms,” the student said.

The university’s VC issued a letter on August 20, in response to the representation made by the students. While responding to some of the requests from the students, he said the construction of the gym and sports facilities is underway but has experienced some delay due to rain. He regretted the inconvenience caused to the female students and said that once the renovations are completed, the university plans to provide comfortable accommodation for freshmen and also explore the possibility of providing food in the aforementioned areas. . Despite a detailed response from the VC, the students claimed that this was not “satisfactory” and that none of their demands have yet been met.

Earlier, reports pointed out that DNLU students had applied to the High Court of Madhya Pradesh for permission to retake the exams without paying for the remedial classes they were required to attend in order to sit for the re-exam. The petition had said the fees set by the university – Rs 7,500 per subject – were arbitrary, according to reports.