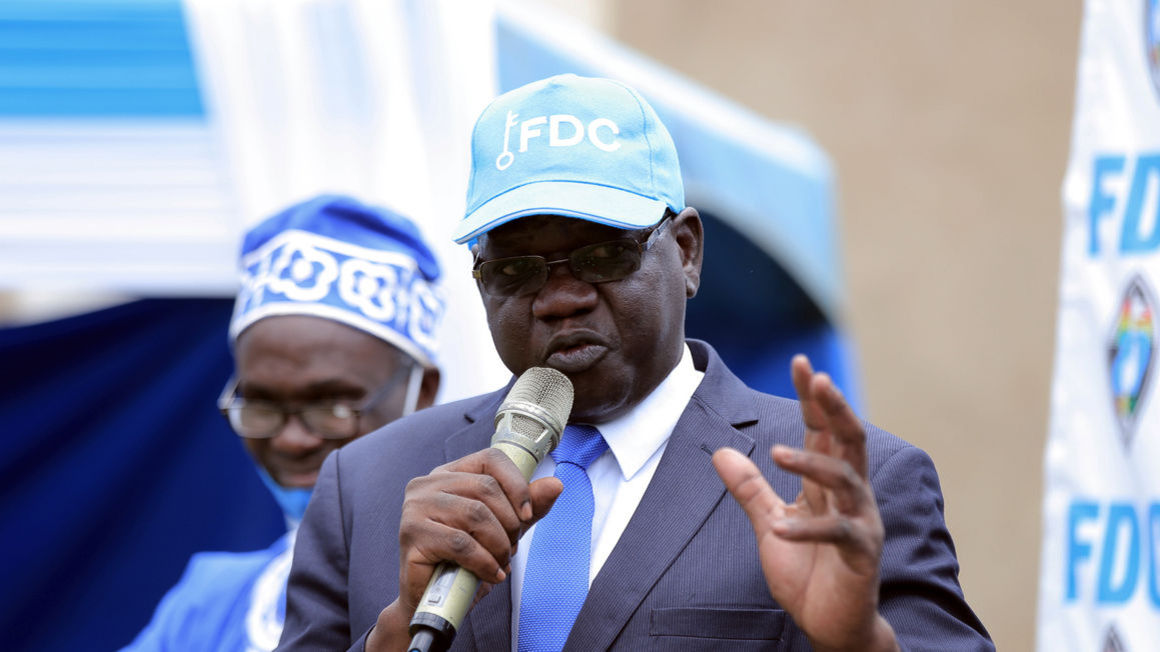 Opposition members of the Forum for Democratic Change (FDC) are crying foul after the arrest of their president, Patrick Amuriat, and 70 other party members who were supposed to be their agents at the various polling stations during the By-elections of the eastern division of Soroti currently underway.
Soroti MP Anna Adeke Ebaju said police picked some of their officers at 3.30am at the Elysian guest house where security guards allegedly first threw tear gas canisters which suffocated the occupants who were inside. In the ensuing scuffle, Mr. Amuriat and 70 other officials believed to be agents were arrested.

She said several documents, including letters of appointment of officers which were to be used in today’s exercise, were also confiscated and the whereabouts of some of the party members are unknown. .
Mr Rafael Ojakal, one of the party members, said police and army officers scaled the perimeter wall and then broke down the gate before throwing tear gas canisters into the room where they were standing. found party officials in the early hours of Thursday morning.
“It’s unfortunate what happened. Vehicles belonging to the RDCS drove around all night, bribing people with several treats,” he said.
Mr. Moses Attan Okia, the FDC candidate, told the press that 70 people, some of whom were to attend the poll on his behalf, had been arrested by the police and the army.
He said Amuriat and several other people were being held at Dokolo Central Police Station.

Soroti police broke into my house in Akisim. They beat, pepper sprayed and arrested all my people. They started at 11:30 p.m. until 12:51 a.m. Below is a sequence of the same. Criminals in police uniforms took my people @PatrickAmuriat pic.twitter.com/MLSWN5eWM5

“The agents have been arrested in the areas of Aloet, Opiyai and Opuyo where they plan to carry out ballot stuffing. Everything is horrible,” he explained.
Mr Attan said the state wanted to forcibly return Ariko to parliament even though he had no support on the ground.
He claimed that the electoral rolls had also been confiscated.
However, East Kyoga Area Police spokesman ASP Ageca Oscar Gregory said Amuriat, former Kasese MP Robert Centenary, Paul Omerou, Soroti East Division Mayor, along with 39 other FDC members were arrested after being found at the Elysian guesthouse in Akisim district, Soroti Eastern Division in Soroti town is campaigning for its candidate beyond the hour legal 6 p.m.

“We would like to warn the public against the violation of electoral laws which goes against the spirit of equal participation and respect for the law by all stakeholders. To ensure public order throughout today’s elections, we have deployed human and non-human resources to provide an enabling environment for all stakeholders to exercise their rights under the law, such as that the right to vote, witness, support, etc. “, ASP Ageca said.
According to him, violation of electoral laws is not only a crime and an act punishable by law under the penal system of the Republic of Uganda, but also a violation of the fundamental human rights of an individual to participate in the electoral process and prevents the application of justice to all citizens as under the law.

“The public is advised not to engage in electoral malpractice which carries criminal penalties, and all those arrested in connection with the commission of these will be arrested and brought to justice,” ASP Ageca added.
At the Omalera mango tree polling station in Opuyo district, four people who were allegedly transported by the ruling National Resistance Movement (NRM) from Kumi and Bukedea districts were arrested for ballot stuffing.

NRM party election commission Dr Tanga Odoi who arrived at the polling station to establish what had happened was ordered to leave by angry voters.
“Are these the NRM primaries? Are you a voter here? You come from Tororo; What are you doing here? Where were you when these people were filling out the ballots,” the angry voters chorused after confronting Dr Odoi.
He reacted by saying: “I am very green about what happened. I just want to know what’s going on. I don’t have a problem with anyone. »

Meanwhile, there was an increase in the number of vehicles without license plates and security checkpoints in the town of Soroti on Wednesday evening. Although the countless vehicles began arriving in the town of Soroti on Monday, security began setting up roadblocks on Wednesday evening, the day before the by-election.
The countless vehicles include police patrol cars, RDC double cabs and executive cars driven by ministers, NRM bigwigs and Toyota Hiace commonly referred to as drones. They were seen patrolling the streets of Soroti without any interference from security agencies.
The development sparked concern from the opposition, particularly FDC officials who said the presence of the cars with numbers torn off or covered in mud was suspicious.
Members of the FDC, whose candidate was expelled from parliament by the Court of Appeal, said the ruling National Resistance Movement (NRM) party used similar tactics in the by-election of Omoro to secure victory.

WATCH: NRM Electoral Commission Chairman Tanga Odoi reacts after being confronted by angry voters at the Omalera polling station where some suspects were arrested for ballot stuffing during the parliamentary by-election of Soroti East division.#MonitorUpdates
📹 Simon Peter Emwamu pic.twitter.com/p9wa8g4aLR

“We are also warning all drivers to refrain from using countless cars as they will be stopped and the vehicles impounded,” ASP Ageca.
During the candidate’s briefing by the Electoral Commission and security agencies at Soroti University on Wednesday evening, FDC Secretary General Nathan Nandala Mafabi instructed the commission and security officials to explain why the countless vehicles were on the streets.
But police and Electoral Commission officials said they were unaware of the countless vehicles in town.

Mr. Moses Mwanga, the East Kyoga Regional Police Commander, promised to track the said vehicles using closed-circuit television (CCTV) “if they are indeed in the city”.

Mr Ageca said on Wednesday that concerned residents should report suspicious vehicles to the police. But at Soroti University, police and military were seen guarding some of the countless vehicles. The university guards could not allow reporters to take photos.