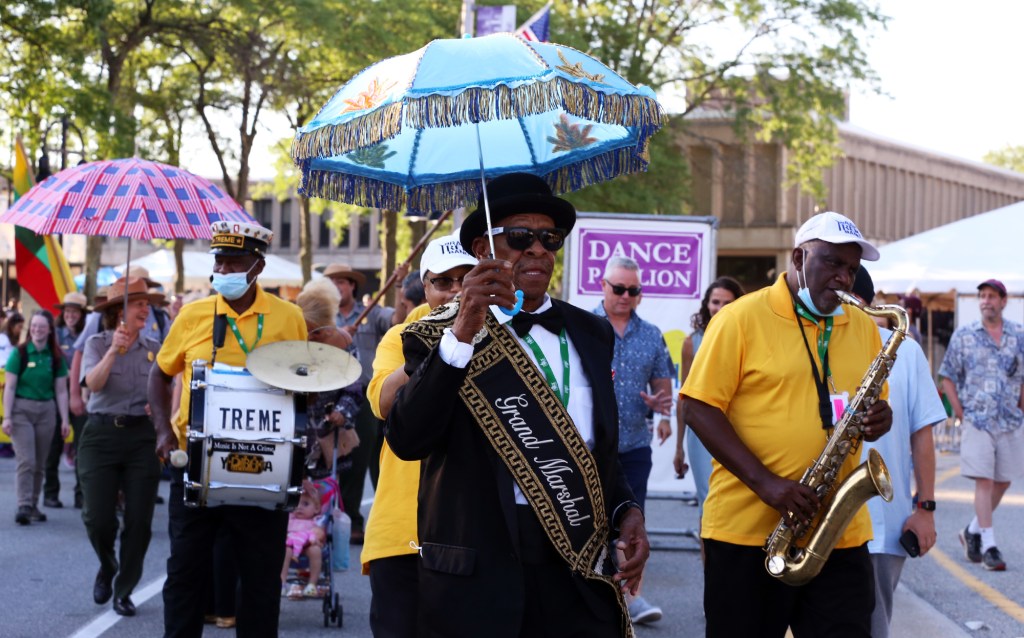 LOWELL – The sound of live music, mingling with crowds and the aroma of food from around the world, signaled the return of the Lowell Folk Festival on Saturday night, after a two-year hiatus.

Downtown Lowell was already buzzing before the first note was played by New Orleans’ Treme Brass Band, who kicked off the festival’s 35th anniversary by leading a spirited parade through Boarding House Park.

Kevin Dwyer, the executive director of the Lowell Folk Festival Foundation, couldn’t help but smile as he recalled the event, which had to be canceled the previous two summers due to the coronavirus pandemic.

“It’s so exciting now that we’re on the precipice and it’s actually about to start again for the first time since 2019,” Dwyer said.

Schwartz, who describes the Lowell Folk Festival as his favorite event of the year, has attended the event for more than 30 years. She remembers being devastated to learn that the festival would not take place in 2020, and then again in 2021.

“On top of the pandemic and all of the other societal woes, having to miss it was just tragic,” Schwartz said.

Steve Christopher, from Westford, also expressed his excitement to be back in Mill City for the festival. Christopher has operated the Hawaiian shaved ice stand, set up in front of St. Anne’s Episcopal Church on Kirk Street, since 2015.

“It feels good to be back,” Christopher said. “I think most people are looking forward to it, you know, with COVID and everything, people got sick of being home. Whenever they can go out, have fun, and get back to normal, they will.

After the parade, which marched from City Hall to Boarding House Park, several city officials addressed the large crowd that had gathered there, including Mayor Sokhary Chau, who described the folk festival in Lowell as “the largest folk festival in the country”.

“We’ve endured two tough years in our past, but that’s part of our past,” added City Manager Tom Golden, who also energized the crowd with a spirited address. “The town of Lowell is here, you are here, and we are ready to celebrate the 35th anniversary of the Lowell Folk Festival with all of you.”

For this year’s festival, Dwyer said he booked slightly fewer performers than normal and also set up four stages instead of the usual five. These decisions were made to ensure they had the necessary support and staff to keep the festival running smoothly.

“But we hope to come back with five stages next year and the same number of artists that we usually have,” Dwyer added.

The festivities are expected to continue Saturday noon. For more information, including the performance schedule, visit Lowellfolkfestival.org.