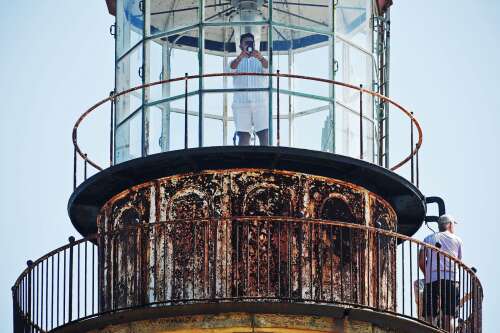 Barbara Hatch, left, from Griswold, stops for a photo before disembarking from the Silver Eel during a New London Maritime Society visit to Little Gull Island Light on Saturday August 20, 2022. (Sean D. Elliot/ The Day)

Tour members take in views of the island and from the walkway and lantern room at Little Gull Island Light on Saturday, Aug. 20, 2022. (Sean D. Elliot/The Day)

New London – For several dozen local lighthouse enthusiasts, this weekend will be one to remember. The remote and normally inaccessible Little Gull Island lighthouse was open for tours to a limited group through the Little Gull Light Foundation in partnership with the New London Maritime Society.

Foundation director David Henry, who acts as caretaker for the Plumb family who own the island and the lighthouse, met the tour groups and offered historical information and a guided tour of the granite tower of 81 feet.

“There’s something magical about lighthouses,” said Waterford tour member David Lewis, who has visited a number of other local beacons but is still waiting for a chance to land on the Race Rock Light. of the shipping company.

Barbara Claire, also from Waterford, commented: “Love it! Made my day”, of travel.

Maritime Company Director Susan Tamulevich checked guests ashore ahead of the group, 18 berths were available for each of the three voyages on Saturday and one Sunday, before boarding the Fishers’ Silver Eel high-speed passenger ferry Island Ferry District for the 40- minute trip to Little Gull Island.

The group was allowed about 40 minutes on the island, with a chance to walk about an acre, climb the 107 steps to the Lantern Room and admire the view of nearby Great Gull, home to a tern colony, as well as Plum Island, Gardiners Island and Orient Point despite summer mist.

Henry explained to the group that the lantern room once housed a second-order Fresnel lens, capable of flashing its light for 24 miles, but has now been replaced by an LED light with the same range, but does not requiring only solar power, and the space not much larger than a basketball.

The light was manned by the US Coast Guard in the 1980s when it was automated. The original lens is now kept at the East End Seaport Maritime Museum in Greenport. The lighthouse was declared surplus in 2009, then when no qualified organization was found to take it, an auction was held and the island was purchased by Fred Plumb, who set up the foundation that is from it. still the owner today, several years after his death.

Tamulevich says the New London Maritime Society would be interested in taking over light management, but the Plumb heirs are instead looking for a private buyer with an asking price beyond their means.

Saturday afternoon, there were two places left on the Sunday morning route. With ownership of the island in question, Tamulevich doesn’t know if future visits will be possible.