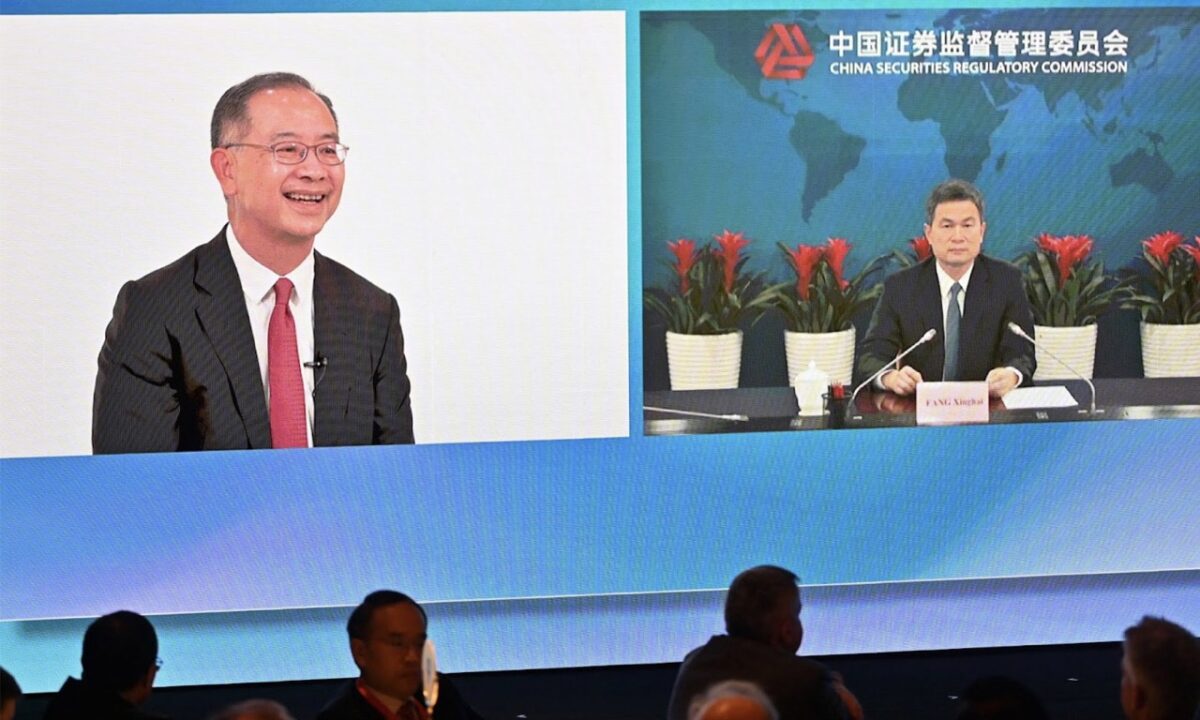 The Global Financial Leaders’ Investment Summit, hosted by the Hong Kong Monetary Authority, was held at the Four Seasons Hotel in Central on November 2.

During his speech, Chief Executive John Lee Ka-chiu said the event was a Hong Kong summit coming back to the fore. He also told guests that “the worst is over”.

Meanwhile, Fang Xinghai, vice chairman of the China Securities Regulatory Commission, criticized foreign media for being myopic and partial in their coverage of China.

He suggested to international participants to avoid reading too much in the global media; he also called on foreign investors to understand China and its policies for themselves.

Academics have criticized John Lee Ka-chiu’s remarks as low level. They said the worst had just begun, thanks to Hong Kong’s national security law and the brain drain from its pandemic prevention policy.

During the 2022/23 budget released in February this year, Finance Secretary Chan Mau-Bo announced the event of the International Financial Leaders Investment Summit.

Due to Hong Kong’s fifth pandemic wave and strict coronavirus prevention policies, questions have been raised by the public over the past few months about how the Hong Kong government could hold the event.

Yue and General Manager John Lee Ka-chiu were the first to deliver a welcome speech.

Speaking in English, Lee described the summit as a “Hong Kong Returning to the Stage” summit. Lee also claimed that “Hong Kong has embarked on the journey to get back to normal.

Lee told guests that the streets of Hong Kong have become busier than before as “social unrest and the worst are in the past”.

What he said at the end of the speech was mocked by netizens for having poor English as a city leader. “Go ahead. Get in front. Not behind. In reality, Lee meant it was time to seize these fantastic opportunities instead of falling behind.

The first session of the summit focused on Mainland Policy – ​​Perspectives from Chinese Financial Regulators. Guests viewed a 40-minute video.

In the video interview, CSRC’s Fang Xinghai said he exchanges words with foreign investors “daily”. He said foreign investors’ good understanding of China has been affected because he noticed they read or watch news about China from foreign media channels.

Fang blamed foreign media for their incomplete and short-sighted coverage of China, reflecting that they didn’t know much about the Chinese market.

Fang continued to share his advice with foreign investors: “Don’t read this international press too much. Don’t overinterpret China. Foreign investors should carefully understand Xi Jinping’s report on the 20th National Congress of the Communist Party of China for themselves. So they can see what is happening in China and Beijing’s true intentions.

After lunch, Mark Carney, former president of the Bank of England, sat down with Norman Chan Tak-lam, the former chairman of the Monetary Authority, in another summit discussion.

Chan then asked if it was a good time to buy English books. Mark Carney laughed and joked that it was a great opportunity to buy books two weeks ago.

The worst has begun

Scholar Wong Wai-kwok, a former assistant professor of politics and international relations at Hong Kong Baptist University, hit back at the government officials in an interview. Wong replied that Lee’s speech at the summit was childish. “The worst had already begun. The National Security Act and Dynamic Zero policies have driven talent out of Hong Kong.

The professor believes that while Lee thought he was selling Hong Kong well, Lee was treating the participants, who are financial leaders, like idiots. Furthermore, Wong said, “Besides the insult to intelligence, Lee embarrassed himself with his poor English as a town leader.”

Wong also criticized the government for using the financial leaders’ summit to promote its political propaganda and “tell stories in Hong Kong”. Yet he wondered when the government ever responded to the global economic crisis and China’s instabilities.

“This type of brainwashing propaganda is counterproductive and can backfire and further reduce investment in China and Hong Kong,” Wong said.

Wong thinks it’s time for foreign investors to decide whether they will continue to invest their money in China and Hong Kong.

“Foreign investors may have to pay a huge price to avoid any tragic loss of their assets due to unstable political situations in China and Hong Kong, as well as the continued tightening of foreign investment,” Wong warned.

In their letters, the organizations criticized many US-funded finance giants for attending the Hong Kong finance and investment summit. The signatures mainly included Hong Kong organizations in the United States, the Hong Kong Democracy Council and Chicago Solidarity with Hong Kong.

The joint letter stated: “Citigroup, JPMorgan Chase, Morgan Stanley, Blackstone Group, Goldman Sachs and other financial institutions that intend to attend the summit will violate the human rights of the people of Hong Kong.

The letter went on to meet with sanctioned Hong Kong officials to develop financial strategies and carry out social activities to support the Hong Kong government, which would make them complicit in the violation of human rights in Hong Kong.

In the joint letter, the organizations called on the U.S. government to notify financial institutions scheduled to attend the summit, including JPMorgan board director and CEO Jamie Dimon, Citigroup executive director Jane Fraser, and other financial institutions. The groups also reminded economic giants to violate US policies, which can carry legal and regulatory consequences.

Finally, five guests announced their absence from the summit before the summit due to a confirmed diagnosis of COVID-19 or other reasons, including Executive Director Jane Fraser, CEO of Barclays, CS Venkatakrishnan, CEO of Capital Group Timothy Armor , CEO of Oriental Huili, Valerie Baudson, and President and COO of Blackstone, Jonathan Gray.

Meanwhile, Paul Chan, HK’s financial secretary, tested positive for COVID-19 during his visit to Saudi Arabia. However, he was listed as a “recovery case” after returning to Hong Kong. Once in Hong Kong, Chan was not quarantined. The government has not released or explained Chan’s test results to the public so there is no need to be quarantined, but there was no explanation for the test results until 2 november.

The government eventually issued a press release on November 2, addressing Chan’s health issues. The press release said that when Chan arrived on November 1, he tested positive for a nucleic acid test at the airport. However, his CT value would be within that of a symptom-free recovering case. The government also noted that before boarding the plane, Chan had tested negative. Therefore, the assessment was a recovered case, and there was no need to be quarantined or restricted by “code red”.

The Hong Kong government announced that between September 26 and November 1, 2022, 455 arrivals to Hong Kong reported being infected with COVID-19 in three months. These cases tested negative before boarding. They received negative rapid antigen tests before boarding the plane and tested positive after the nucleic acid test upon arrival in Hong Kong. None of those affected showed symptoms and the CT value of the nucleic acid tests was relatively high.

The Ministry of Health assessed that Chan’s recovery case must not be contagious, so he was not listed as a newly infected or still contagious entry case. Therefore, there is no need to quarantine or enforce code red restrictions.