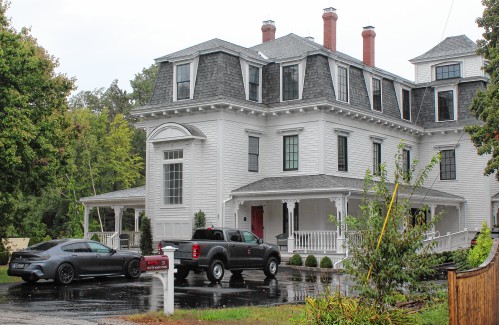 NEW SALEM – The New Salem Museum and Academy of Fine Art is ready for operation, but has not obtained a certificate of occupancy – which the owners believe will not be secured until a lawsuit in the New Salem Lands Court status will not have been resolved.

Husband and wife Vincent and Laura Barletta purchased 37 South Main St. from Vincent’s mother about 2 1/2 years ago in hopes of displaying their art collection for public enjoyment and host events for a fee. But some townspeople worry about noise pollution, alcohol consumption and environmental impacts. A lawsuit was filed in state land court about a year and a half ago by scorers Steven and Jane Schoenberg, Peter and Sandra Fisher, Dorothy Johnson and Susan Arnold, who objected to the special permit issued to the Barlettas by the Planning Board, which is listed as a defendant with the Barlettas. Johnson is listed as a plaintiff but died in February.

But the Barlettas said the city board of health approved the systems. Attempts to reach members of the health board were unsuccessful on Tuesday. Vincent Barletta believes the New Salem city attorney — Mirick O’Connell Law Firm — advised Delorey not to issue a certificate of occupancy until the lawsuit was heard, which , according to Vincent, could take up to three years. Delorey declined to comment further.

The Barlettas provided the Greenfield Recorder with a walking tour of the three-story facility on September 22.

“The majority of the pieces in the collection are by living artists, and most of them are under, I would say, 55,” Laura said. “There is a bit of everything. We have modern things, very technical things.

A painting studio on the top floor is expected to be the site of workshops conducted by the artists who feature in the Barlettas’ collection. According to the institution’s website, the academy’s program “will be based on the concept of a graduate program, where students can immerse themselves in the various techniques presented throughout the collection.”

Vincent, owner of Barletta Engineering/Heavy Division in Canton, said his parents bought the building in 1988, which once housed a dormitory and home economics teaching center for New Salem Academy, where his grandmother Vincent Barletta was a student. The school closed in 1969.

There is an entrance/exit on the south side of the building, with merchandise on display and a reception. The Great Hall, as Vincent’s parents called it, consists of a piano as well as the first paintings that the guests will see. Laura Barletta said there are approximately 70 suspended pieces that will be shot.

“We’ll just wait and see… how many people end up passing through,” she said.

The central gallery on the first floor was once a salon, where the Barlettas had their wedding reception after getting married in a church down the street. Laura explained that she and her husband had been collecting art for about 15 years, ever since they traveled to New York for a birthday and bought an original painting by Michael Klein which they saw and are fell in love. Klein is now the director of the museum, and he and his wife, Nelida, live upstairs as 24-hour caretakers.

Some pieces by Michael Klein hang on the walls of the museum. One such work is a 2010 piece depicting a reclining man deep in thought.

“He’s my stepfather,” Klein explained. “He built my studio in Argentina and they have 10 children. The story behind the photo is that he is thinking of family. It’s called “Without work”. He’s laying there, thinking about how he’s going to support himself.

The Barlettas’ collection also includes an original piece by Andrew Wyeth from 1993 entitled “Marriage” and an original portrait by John Singer Sargent from 1898 entitled “Mrs. Charles Anstruther-Thomson. The Barlettas, who live in Weston, hope these works paintings by famous painters will attract visitors to the gallery to fall in love with newer artists.

Laura said she would like to rename the galleries in the building following significant monetary donations.

The establishment has already hosted three students – two Americans and a German attending the Florence Academy of Arts in Italy.

More information is available at newsalemmuseum.com.