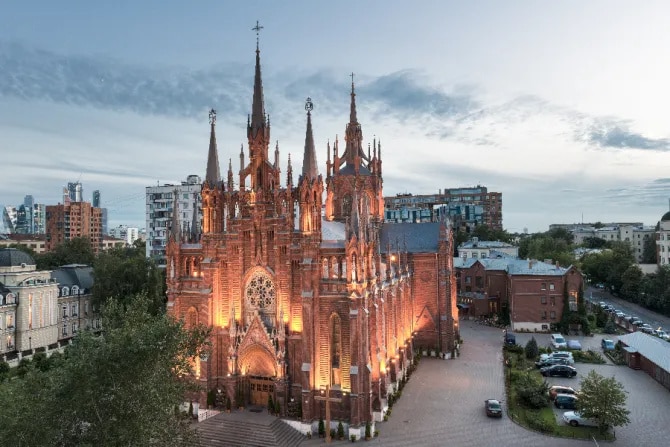 More than 15 years before Our Lady of Fatima requested the consecration of Russia to the Immaculate Heart of Mary, the construction of a cathedral dedicated to the Immaculate Conception began in Moscow. It was to be the largest Catholic cathedral in Russia.

the neo-gothic cathedral was built before the Russian Revolution to a design by Foma Bogdanovich-Dvorzhetsky, an architect trained at the Imperial Academy of Arts inaugurated by Catherine the Great.

At the time, Moscow’s Catholic minority population numbered over 30,000, which was beyond the capacity of the city’s two existing Catholic churches.

Construction began in 1901 and lasted 10 years until the church was consecrated on December 21, 1911, in the name of the Immaculate Conception of the Blessed Virgin Mary.

Father Mikhail Tsakul served as the cathedral’s first rector. He comes from a family of Polish origin. He had studied at the Catholic Seminary in Saint Petersburg, where he was strongly influenced by the Servant of God Father Konstantin Budkevich – who was later executed on Holy Saturday night in 1923 for organizing non-violent resistance against the first Soviet anti-religious campaign.

As rector, Tsakul was arrested several times in the years following the Russian Revolution of 1917. He was arrested in 1924, 1927, 1929 and again in 1931, when he was arrested with a group of Catholic clergy and laity accused of “raising children in an anti-Soviet spirit”.

Tsakul was exiled to Tambov in central Russia for two years before being allowed to return to Moscow, where he resumed his ministry.

Less than five years after his return, the priest was arrested for offering Mass on May 3, Poland’s Constitution Day, at the request of the Polish ambassador. He was held in the notorious Butyrka prison for three months before being sentenced to death.

He was shot on August 21, 1937 and buried in a mass grave with other victims of Soviet persecution.

Other martyr priests closely linked to the cathedral include Father Sergei Solovyov and Blessed Leonid Fedorov, who offered his last Easter mass there before dying after years of work in a gulag.

After the death of its rector, the Cathedral of the Immaculate Conception was closed in 1938 and its property looted. It would be over 50 years before mass was again offered inside the cathedral, which would not reopen until 1999.

During the atheistic Soviet era, the cathedral building housed a scientific research institute, and its interior was completely modified so that it could be used as a dormitory for machine operators.

In 1990, the Soviet authorities gave Father Tadeusz Pikus, chaplain to Poles working in the USSR, permission to offer Mass on the steps outside the cathedral. Hundreds of people attended the open-air mass held in December in the freezing cold.

But it will be years before the cathedral building is returned to the Catholic Church.

Moscow Catholics continued to attend Mass from time to time on the steps of the cathedral, and then in its narthex, in the years that followed, until Bishop Tadeusz Kondrusiewicz sent a letter to President Boris Yeltsin in 1995 asking that the previously authorized transfer of the cathedral to the Catholic Church be expedited.

The following year, a statue of Our Lady of Fatima was crowned in the cathedral, and a Eucharistic procession took place through the streets of Moscow.

Pope John Paul II prayed the Rosary by teleconference with Catholics gathered inside the Moscow Cathedral in March 2002.

On the 100th anniversary of the cathedral’s consecration, Benedict XVI said the story of Moscow’s Immaculate Conception Cathedral is one of “redemption and suffering.” He described the cathedral as “a shining symbol of the strength of faith”.

A priest said in 2017 that about 150 people are baptized into Catholicism each year in Moscow.

Bishop Paolo Pezzi, who heads the Catholic Archdiocese of the Mother of God in Moscow, welcomed “with great joy and gratitude” Pope Francis’ decision to consecrate Russia and Ukraine to the Immaculate Heart of Mary on March 25.

The Archbishop will offer Mass in the Cathedral on March 25, the Solemnity of the Annunciation, and the congregation will watch and pray with the live broadcast of the papal consecration From Moscow.

Osmania University plans to build two more hostels, one for men, the other for women