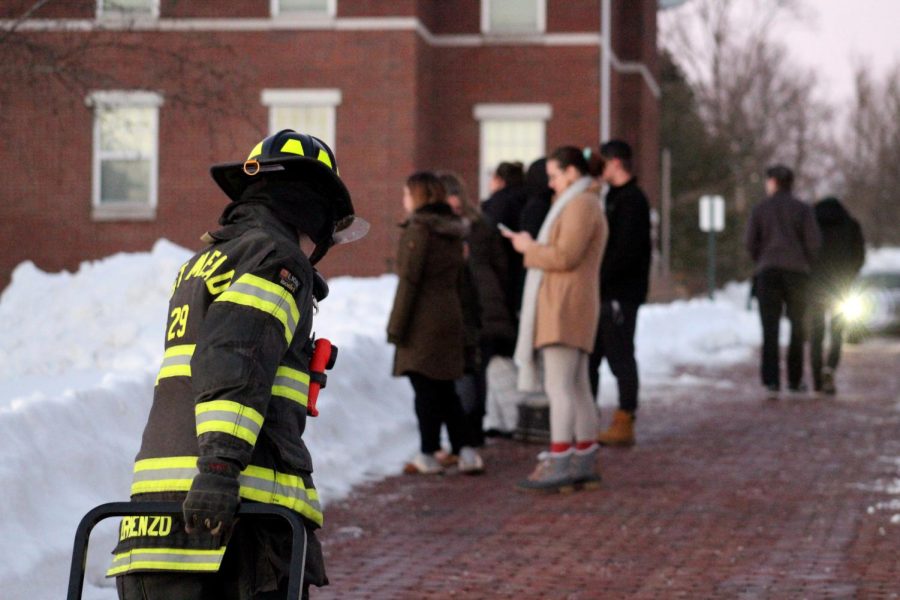 At approximately 5:30 p.m. tonight, an unidentified student sounded the fire alarm in the North Village II dormitory to report a fire in a recycling bin.
According to NVII resident Shyler Kreitz, ’22, that same student pulled the still-smoldering bin out of the building and onto the entrance deck on the southeast side of the building.
“The woman who sounded the fire alarm and also took out the trash,” Kreitz said. “She was explaining that she was leaving to go to her apartment, and she saw the trash can, and she was like, ‘Yeah, I’m going to do something about it’.”
The Allegheny Public Safety Office was called, and at 5:37 p.m. responders from the Meadville Central Fire Department and the Meadville Area Ambulance Service were on the scene.
Responders then opened windows on the northwest (N. Main St.) and southeast sides of the buildings to vent the smoke, installing fans to speed the process. Many students took refuge in the nearby Henderson Campus Center, where the Association for Asian and Asian American Awareness (A5) was hosting a Lunar New Year event.

By 6:20 p.m. the alarm had died down and the students returned to the building. At 6:31 p.m., an “ALERTAllegheny” message was sent to campus, telling students to “avoid NV II and surrounding areas”. The email also stated that “students will be notified shortly when it is safe to enter the building.”
A follow-up message at 6:37 p.m. said students could return to the dorm and the emergency was over.
No injuries were reported during initial communication between all campuses.
A statement from the MCFD is expected tomorrow on the incident.

This is a developing story; stay tuned to @ac_campus on Twitter and alleghenycampus.com for updates.