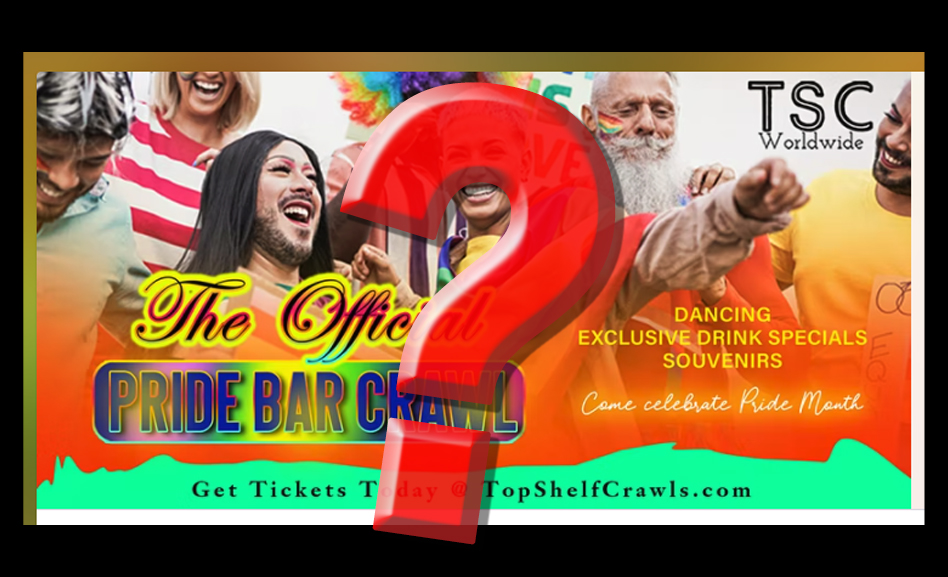 UPDATE: The “official” Pride Pub Crawl does not crawl into actual LGBTQ bars or any Oak Lawn locations

“Dallas Pride is a nonprofit organization dedicated to strengthening, supporting, and celebrating the LGBTQ+ community by fostering connections among community members, as well as with our allies and supporters. We were recently asked if we would like to receive a donation from an event. Due to miscommunication, this event was incorrectly promoted as a Dallas Pride exclusive event.

“Although this was not an event that we produced, we were honored to be the beneficiary of it and to inspire others outside of our community to celebrate Pride.

“Dallas Pride proudly supports our LGBTQ+ community and businesses, and is thrilled to also have allies standing by our side with their generous support. Together we can continue our mission.

ORIGINAL POSITION: Owners and managers of LGBTQ bars and nightclubs were surprised this week to find ads online this week for “The Official Pride Bar Crawl – Dallas” which, surprisingly, does not crawl into any of the LGBTQ bars/clubs/restaurants or, in fact, anywhere near the gay district of Oak Lawn.

The EventBrite page, at the time of this writing, has gone offline. The official Pride Bar Crawl – Dallas post has also been removed, it seems.

Dallas Voice attempted to contact Top Shelf Crawls. We received an automated response that they would get back to us within five business days.

Dallas Voice reached out to Jaron Turnbow, executive director of Dallas Pride. We are expecting a statement from him soon and will update this post as soon as we receive that statement.

(Nothing against any of these bars, but none of them are LGBTQ bars and none are in the Oak Lawn/Cedar Springs area.)

Tanner Roberts, manager of Cedar Springs Tap House, told the Dallas Voice today, “I had seen it show up as a sponsored ad on Facebook for a little while. I finally clicked on it today to see which gay bars were signed to. That’s when I was so shocked to see that these were bars that weren’t in our community.

He continued, “What concerned me was that it was associated with Dallas Pride and the use of the Dallas Pride logo on the EventBrite link. … Apparently the same company is doing the same thing in Nashville, according to a friend of mine there.

The Top Shelf Crawls website says the company runs “one-of-a-kind bar crawls” in various cities, most along the East Coast, it seems. Under its “upcoming events” link, Top Shelf is hosting “Official Pride Bar Crawls” on June 11 in St. Pete, Florida, Greenville, South Carolina and Nashville. The Dallas event was removed from the site’s “upcoming events” section as of 6 p.m. after Dallas Voice began asking about it.

Roberts said he had never heard of this company and that the Tap House was in no way affiliated with this pub crawl. Several other members of the Dallas Tavern Guild also said they had never been contacted by that company and were in no way connected with the event.

Seven of the bars/restaurants along Cedar Springs are actually participating in the Pride Pub Crawl – Dallas (no “official” in name and no Dallas Pride logo on page) Featured Saturday, June 18 by Crawl With Us. Participating locations are Roy G’s, Sue Ellen’s, S4, JR.’s Bar & Grill, TMC: The Mining Company, Mr. Misster and Cedar Springs Tap House.

Tickets for this event are between $15 and $20, available on EventBriteand a portion of the proceeds will be donated to The Trevor Project.

On Top Shelf’s Facebook post about the Official Pride Bar Crawl – Dallas, in a comment thread that appears to have since been deleted (but we have screenshots), a Dallas resident asked why the company used the official Dallas Pride logo “when you are not affiliated with Dallas Pride?”

The company responded, “We are working with Dallas Pride on this exploration and a large portion of the proceeds go to them to support the community.”

Then the Dallasite asked why, if this was an official Pride tour, none of the gay bars were included. The company did not answer this question directly, but later posted a response addressed to the person who asked the question:

“Thank you very much for the question about the Dallas Pride Crawl. The safety of participants is paramount to any of our crawls. When hosting a crawl, we work with venues that are within easy reach distance to walk because they are walk crawls, which is why all of our crawls take place along a route or within a radius of less than a few blocks.

(A slew of LGBTQ establishments—none of which, apparently, were contacted to participate in this event—are all located within a three- to four-block radius on Cedar Springs Road, by the way.)

The Top Shelf message continues: “Not only does this give our attendees a fun and exclusive night out in an easily accessible location, it also helps reduce the risk of impaired driving between venues that would be spread over a larger area.

“As for our Pride Crawls, working with local Pride organizations and donating a portion of proceeds to a local LGBTQIA+ charity or foundation was one of our top priorities. We have partnered with or are actively trying to contact local Pride organizations regarding their involvement in all cities in which we produce crawls. We are working with Dallas Pride and are very excited to do so so that this crawl can have the most positive impact in Dallas’ LGBTQIA+ community.

“We have also made it a priority to include as many LGBTQIA+ owned, operated and affiliated sites as possible within the area or route of the crawls. In Dallas, so far we’ve partnered with Bootys and Tequila Delicious, both of which advertise themselves as gay bars and host drag shows and the like.

“We are also open to any suggestions or recommendations for places any of our participants would like to include in, along or around the route or designated crawl area. We may have been in touch with them before, but we’re happy to get back to you to see if we can board your favorite location for the crawl.

Bootys Street Food is a bar and restaurant located inside the Deep Ellum Hostel. Bootys does indeed host drag shows and identifies itself as “Deep Ellum’s only LGBTQIA+ bar”. However, neither Bootys nor Deep Ellum Hostel feature on Top Shelf’s pub crawl routes.

Tequila Delicious, at 2901 Thomas Ave., according to its website, is “a neighborhood taqueria specializing in margaritas and street tacos. Large dog friendly patio with games and good vibes. Live sports and entertainment every week.
The restaurant organizes a “Drag Lunch” every Saturday and Sunday. Nothing on the restaurant’s website indicates that it is an LGBTQIA+ bar.

54 years of memories: the destruction of Tutwiler Hall is scheduled for this summer